Insufficient suction. Excessive resistance on suction line or insufficient charge. Such as the pump speed is too large, the liquid level in the oil tank is too low, the oil inlet pipe leaks, the oil filter is blocked, etc.​​

Excessive leakage. The gap of the pump is too large, which is caused by poor sealing. For example, the oil distribution plate is scratched by metal fragments, iron filings, etc., and the end face leaks oil, the sealing surface of the one-way valve in the variable mechanism is not well matched, and the bearing surface of the pump body and the oil distribution plate has blisters or grinding marks. Solution: Identify the damaged part of the pump by checking the foreign matter mixed in the hydraulic oil in the pump body.​​ 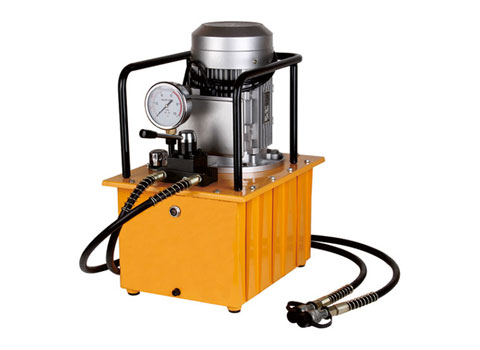 The oil discharge is not zero at the neutral position

When the inclination of the swash plate of the variable axial piston pump is zero, it is called the neutral position, and the output flow of the pump should be zero at this time. But sometimes there is a phenomenon that the median deviates from the midpoint of the adjustment mechanism, and there is still flow output at the midpoint. The reason is that the position of the controller is deviated, loose or damaged, and it needs to be re-zeroed, tightened or replaced. Insufficient angular maintenance of the pump and wear of the tilt trunnion can also cause this phenomenon.

Output flow fluctuations are related to many factors. The variable pump can be considered to be caused by the poor control of the variable mechanism, such as foreign matter entering the variable mechanism, and scratches, wear marks, scars, etc. are drawn on the control piston, resulting in unstable movement of the control piston. Due to insufficient amplifier energy or damaged parts, the damper of the spring-containing control piston has poor performance, which can cause the control piston to move erratically. Unstable flow is often accompanied by pressure fluctuations. Such failures generally require dismantling the hydraulic pump, replacing damaged parts, increasing damping, increasing spring stiffness and control pressure.

The output pressure is too high

If the pump shaft and the motor shaft are not concentric or top dead, the bearings and couplings of the rotating shaft are damaged, the elastic pad is damaged and the assembly bolts are loose, all of which will generate noise. For pumps that run at high speed or transmit large energy, check regularly and record the amplitude, frequency and noise of each component. If the rotational frequency of the pump is the same as the natural frequency of the pressure valve, resonance will be caused, and the rotational speed of the pump can be changed to eliminate the resonance.​​

The noise generated by the liquid flow in the pipeline

The oil inlet pipe is too thin, the flow capacity of the oil inlet oil filter is too small or blocked, the oil inlet pipe sucks air, the oil gap is too high, the oil level is too low, the oil absorption is insufficient, and there is liquid hammer in the high-pressure pipeline, etc., noise will be generated.  Therefore, the fuel tank must be properly designed, and the oil filter, fuel pipe and directional valve must be selected correctly.

There are two reasons for the excessive heating of the hydraulic pump. One is the heat generated by mechanical friction. Since the moving surfaces are in a state of dry or semi-dry friction, the moving parts rub against each other to generate heat. The second is heat generation by liquid friction. The high-pressure oil leaks into the low-pressure chamber through various gaps, and a large amount of hydraulic energy loss is converted into heat energy. Therefore, the correct selection of the gap between the moving parts, the volume of the fuel tank and the cooler can prevent the excessive heating of the pump and the excessively high oil temperature. In addition, the blockage of the oil return filter will cause the oil return back pressure to be too high, which will also cause the oil temperature to be too high and the pump body to overheat.