Today, we are going to introduce gear pump to you. Gear pump is applied in industrial widely, if you have a general idea about gear pump, it will help you a lot in you work.

The gear pump is a rotary pump that relies on the change and movement of the working volume formed between the pump cylinder and the meshing gear to transport liquid or pressurize it. Two closed spaces are composed of two gears, pump body and front and rear covers. When the gear rotates, the volume of the space on the disengagement side of the gear increases from small to large, forming a vacuum. After the liquid is sucked in, the volume of the space on the meshing side of the gear changes from large to small, and the liquid is squeezed into the pipeline. The suction cavity and the discharge cavity are separated by the meshing line of the two gears. The pressure at the outlet of the gear pump depends entirely on the resistance at the pump outlet.

The concept of a gear pump is very simple. In its most basic form, two gears of the same size rotate in meshing engagement with each other in a tightly fitted housing. The inside of the casing is similar to the "8" shape, and two gears are installed in it. The outer diameter and both sides of the gears are closely matched with the casing. The material from the extruder enters the middle of the two gears at the suction port, fills the space, moves along the casing with the rotation of the teeth, and finally discharges when the two teeth mesh.

In terminology, a gear pump is also called a positive displacement device, which is like a piston inside a cylinder. When one tooth enters the fluid space of another tooth, because of the liquid being incompressible, the liquid and the tooth cannot occupy the same space at the same time. The liquid is thus mechanically squeezed out. This occurs continuously due to the continuous meshing of the teeth, thus providing a continuous discharge at the pump outlet. For each revolution of the pump, the amount of discharge is the same. With the uninterrupted rotation of the drive shaft, the pump discharges fluid uninterrupted. The flow of the pump is directly related to the speed of the pump. 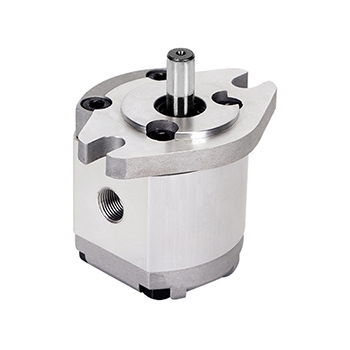 The pump body is equipped with a safety valve. When the discharge pressure exceeds the specified pressure, the delivery liquid can automatically open the safety valve so that the high-pressure liquid returns to the suction pipe.

The internal gear pump is composed of a pair of intermeshing internal gears and the crescent-shaped parts between them, the pump casing, etc. The function of the crescent is to separate the suction and discharge chambers. When the driving gear rotates, a partial vacuum is formed where the gears are disengaged. And the liquid is sucked into the pump to fill the teeth of the suction chamber, then enters the discharge chamber in two ways along the inner and outer sides of the crescent. Where the gear teeth come into mesh, the liquid present between the teeth is squeezed and fed into the discharge pipe.

Disadvantages: The radial force is unbalanced, the flow pulse is large, the noise is large, the efficiency is low, the interchangeability of parts is poor, it is not easy to repair after wear, and it cannot be used as a variable pump.