What is an Electric Winch? 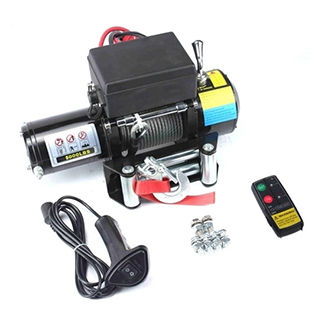 A winch is a machine that has a vertically mounted cable reel that can be wound under power drive，but is not a machine for storing ropes; It also refers to a winch whose rotation axis is perpendicular to the deck. The electric winch is the most common type of winch, which is used to complete the traction drive of human or mechanical power through the reel.

The electric winch is a self-protection and traction device for vehicles and ships. It can be used for self-rescue and rescue in harsh environments such as snow, swamps, deserts, beaches, and muddy mountain roads. Installation of facilities and other operations is an indispensable safety device for military police, petroleum, hydrology, environmental protection, forestry, transportation, public security, border defense, fire protection and other outdoor sports.

Electric winches typically consist of components such as couplings, brakes, gearboxes, and reels, all of which are mounted on a frame for material handling. Electric winches have good speed regulation, allowing heavy loads to be lifted to higher positions at relatively fast speeds and empty hooks to be lowered quickly, while for sensitive materials, electric winches can be operated at relatively slow speeds.

The working principle of electric winch

Generally, an electric winch converts electrical energy into mechanical power through an electric motor, the rotor of which runs and generates the output and then passes through the power of the brake, a reducer that reduces the speed of the spinning reel. The reel wraps the wire rope and passes through the pulley block to allow the hook to lift the load and convert the mechanical energy into mechanical work for material handling such as the transport, loading and unloading of heavy objects.

The electric winch is the most common type of winch, which relies on the vehicle's own electrical system to drive the winch. The electric winch can basically be used normally when the vehicle is on fire, which is its biggest advantage and unmatched by other winches, especially for areas with a lot of water. The electric ATV winch is easy to install and can be installed in multiple positions and moved quickly.