How does a Molded Case Circuit Breaker Work?

The structure of the MCCB

As shown in the picture below, the hook engages the latch of the common trip shaft via a roller trigger. The common tripping shaft is supported by a support arm fixed on the base of the overcurrent tripping device in a freely rotating state. Each pole is provided with a time-delayed trip bimetal element for overcurrent detection and tripping. and an electromagnet for instantaneous tripping. The bimetal is heated and bent in the direction of the arrow and rotates the common trip shaft clockwise. When the latch is disengaged, the hook also rotates clockwise to release the bracket. The electromagnet consists of a fixed iron core surrounding the conductor, a movable iron core, and a retracting spring that continuously applies force to the movable iron core in the separation direction. When the overcurrent exceeds a certain limit, the moving iron core will be sucked by the return spring, and the tripping lever will turn the common tripping shaft clockwise to release the cradle. Since each pole is fitted with a bimetal and an electromagnet, overcurrent on any pole will affect the common trip axis, so all poles can be tripped at the same time without phase failure. 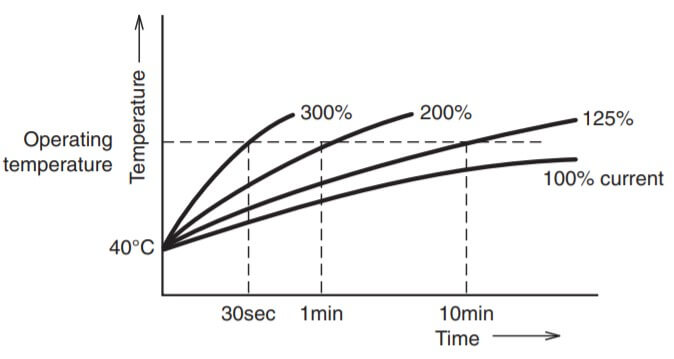 When this relationship is plotted on the current operating time scale, an inverse time trip characteristic as shown in the figure below can be obtained. 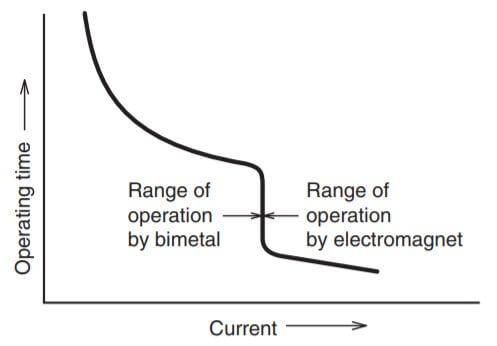 In the event of a short circuit, the circuit must be disconnected immediately. In this case, the electromagnetic trip device will trip the circuit instantaneously before the bimetallic curve. The instantaneous tripping current value is generally set to more than 10 times the rated current to avoid unnecessary actions caused by instantaneous overcurrent, such as the excitation inrush current of the transformer or the starting current of the induction motor.

The entire unit of the MCCB is enclosed with plastic case insulators, so when the load current is switched, no arcing is released. Also, this type is safe because the live parts are not exposed. The contact switching speed is constant regardless of the handle switching speed. The load current can be switched safely. Even if the overcurrent flows only to one pole, all poles are disconnected at the same time, so there is no possibility of phase failure.