Linear rails are stiffer than linear rods due to the difference in the mounting method. Linear rails take advantage of the additional stiffens of the mounting surface using more screws per unit length. Linear rails are commonly fixed at the ends, making them susceptible to bending and vibrations. As you can see in the schematic above, linear rails distribute their resistance to loads among many nuts or screws. This distribution makes them less likely to bend at a result of excessive load, and less likely to vibrate due to fast motion. 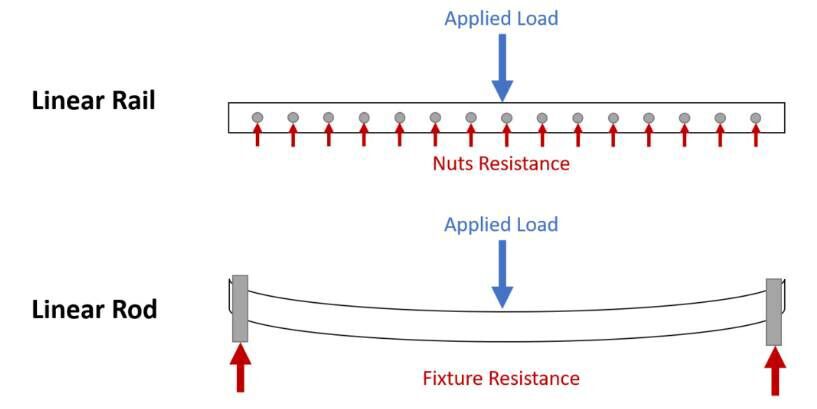 On the other hand, linear rods utilize fixtures the ends of the smooth rod to support the rod. Although the fixtures could be stronger than individual nuts, they are less capable of preventing bending and vibrations due their distance from the applied loads. Additionally, the issue of bending gets worse as the linear rod gets longer. However, a linear rail has nuts that are distributed along the rail, making length a relatively negligible issue. If linear rails become excessively long, they are more likely to depend on the stiffness and rigidity of the frame they are attached to.

In general, linear rails offer greater precision and accuracy compared to linear rods. Both come in different tolerance classes; however, achieving the optimal accuracy levels is dependent on the assembly and manufacturing process of the machine that relies on linear bearings.

Linear rails are designed such that the carriage can only move in one direction. Linear rails, on the other hand, allow the carriage to travel along the rod and rotate around it. This additional degree of freedom reduces the accuracy of linear rods compared to linear rails. Additionally, linear rail carriages are commonly designed with circulating ball bearings which allow the carriage to move smoothly across the rail. Linear rod carriages are commonly do not have circulating ball bearings, which causes binding and additional friction.

Parallelism is major contributor to the accuracy of linear bearing assembly. However, it is only a factor when linear rails are used in pairs. If the distance between two rails changes along the direction of motion, the carriages will bind, causing an increase in friction and a loss in precision. In light weight or compact applications, where a single linear rail is sufficient, parallelism will not be an issue. However, linear rods must be used in pairs. This makes parallelism an issue for linear rods.

Both, linear rails and linear rods, depend on the assembly process to achieve their optimal precision. However, it is easier to achieve a higher degree parallelism and flatness with linear rails compared linear rods. ATO shop provides linear guideways with different lengths.

The assembly process of linear rails is more complex compared to linear rods. However, with the right equipment, linear rails could achieve higher accuracy and greater rigidity. Note that the tools and equipment used to perfectly align a pair of linear rails are expensive. However, it is possible to achieve reasonable results without them.