In recent years, as the increasing drastic market competition and the improving of the electromechanical integration technology in textile machinery, the textile machines at home and abroad generally enter into the era of frequency control and drive. The frequency control of the speed regulating replaces the traditional machine structure. It has been widely adopted to the shuttleless loom and basic textile equipment, such as blowing, cotton carding, lap forming, roving, spinning, spooling, warping, slashing, and the other main technological processes. What is more, the newly developed textile machines have adopted VFD to control motor speed without an exception, which has greatly improved the reliability of the textile machine, textile quality and automation degree. 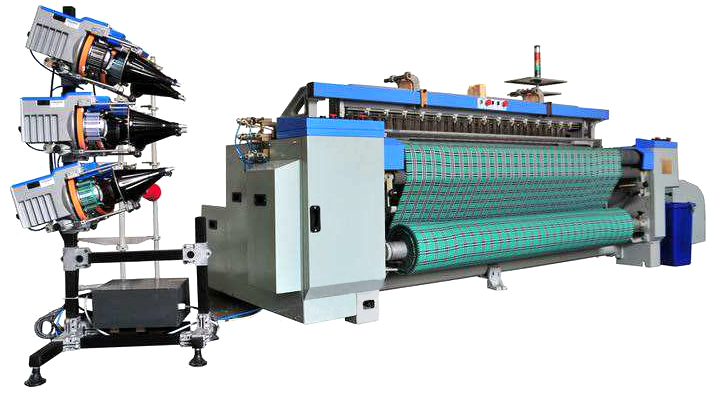 Working principle
Air jet loom employs the working principle of using the spraying air flow to pull the weft to pass through the shed. It utilizes air to be the weft insertion media and pulls with the frictional traction force exerted by the spayed compressed air flow to the abb. Then the weft will be led to pass through the shed. The purpose of weft insertion is achieved through the jet flow generated by the air injection. Such a weft insertion method will enable the weaving machine to realize high speed and high output. In several types of shuttleless looms, the air inject loom has the maximum travel speed. Because of its reasonable weft insertion means, high wefting rate, simple and safe operation, it has the advantages of wide application, low consumption, high efficiency, high travel speed and low noise and so on. It has become one of the most promising new weaving machines. Because weaving different clothes requires different operating speed, the operation of the air jet loom always has to change the revolving speed of the main shaft. However, the revolving speed of the air jet loom is changed through altering the belt and transmission ratio before transformation. It has many problems. Aimed at the special requirements of the air jet loom, if the revolving speed of the main shaft is changed through the VFD control of the motor, there is no need to change the belt and have any alteration to the device. The purpose of stepless speed regulation can be realized through changing the frequency on the panel. Through the special control method of VFD, it not only satisfies the special requirements of the air jet loom to the acceleration time, but also realizes stepless regulation to the speed control. It will have convenient and accurate debugging, increase the efficiency of the air jet loom greatly, especially save the energy in low revolving speed, thus reducing the cost.
Parameters setting of ATO VFD for the air jet loom

Note: In debugging process, because of the short starting time, the instant current is rather high. The operator can set the automatic current limiting as the practical condition.