Coating thickness gauges generally use electromagnetic induction to measure the thickness of coatings. The working probe is placed on the surface of the component to be tested, thus creating a closed magnetic circuit. As the distance between the moving probe and the ferromagnetic material changes, the magnetic circuit will change to varying degrees, causing magnetic resistance and changes in the inductance of the probe coil. Using this principle, the distance between the probe and the ferromagnetic material can be accurately measured, which is the measured coating thickness. Coating thickness gauges can be used not only for precise measurement in the laboratory, but also in engineering fields and are widely used in metal manufacturing, chemical industry, aerospace, scientific research and development and other fields. Now, let’s troubleshooting the coating thickness gauge. 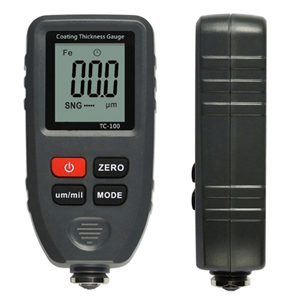