How does a Laser Distance Meter Work?

Laser distance measurement is based on the same principle as radio radar. After the laser is aimed at the target and fired, its round-trip time is measured and multiplied by the speed of light to obtain the round-trip distance. Since laser has the advantages of high directionality, high monochromaticity and high power, which are crucial for measuring long distances, determining the orientation of the target, improving the signal-to-noise ratio of the receiving system, and ensuring the measurement accuracy, laser rangefinders are gaining more and more attention. Based on the laser rangefinder, LIDAR can not only measure the distance, but also the target's orientation, speed and acceleration. It has been successfully used for the ranging and tracking of artificial satellites. 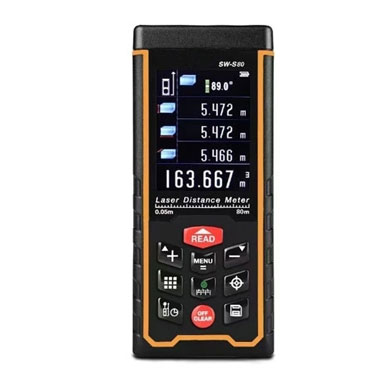 Laser distance meters all use the same basic principle concept. when the button of the rangefinder is pressed, emit laser beams. These beams are reflected back later from a distant target body, and the rangefinder's built-in high-speed clock measures the total time from the time the beam is emitted to the time it is reflected back. Because we know how fast the speed of the beam (i.e.: the speed of light) we can use this time difference measurement to calculate the distance and then display the distance from the target to the user on the rangefinder's screen.

The principle of distance measurement basically boils down to measuring the time it takes for light to travel to and from the target, and then calculating the distance D from the speed of light c = 299792458m/s and the atmospheric refraction coefficient n. Since it is difficult to measure time directly, the phase of the continuous wave is usually measured, called a phasor rangefinder. Of course, pulsed rangefinders are also available.

The measurement object plane must be perpendicular to the light

Usually precision ranging requires total reflection prism with, and housing measurement with the rangefinder, directly to the smooth wall reflection measurement, mainly because the distance is relatively close, light reflection back to the signal strength is large enough. With this can be known, must be vertical, otherwise the return signal is too weak will not be able to get the exact distance.

Usually it is also possible, the actual engineering will use thin plastic plate as a reflective surface to solve the problem of serious diffuse reflection.

Laser distance meter is widely used in terrain measurement, battlefield measurement, tank, aircraft, ship and artillery range of the target, measuring the height of clouds, aircraft, missiles and artificial satellites, etc.. It is an important technical equipment to improve the accuracy of high tanks, aircraft, ships and artillery. As the price of laser rangefinder continues to drop, industry is also gradually starting to use laser rangefinder, which can be widely used in industrial measurement and control, mining, ports and other fields.