Switching power supply (SMPS) is widely used due to its compact size, light weight and high efficiency. But it has its own disadvantage of producing noises, which not only affect the normal operation of the circuit, but also interfere with the neighboring electronic equipment. So how to reduce the noise of SMPS? First of all, we need know where the noise comes from, and then we can eliminate it accordingly.

Sources of noise
1. Switch tube and Rectifier
During the turn on and turn off of switch and rectifier tubes, the radio frequency energy generated by the change of large current is the main source of noise. Because of its high frequency, it radiates directly to space in the form of electromagnetic energy, or transmits along the input/output wires in the form of an interfering current.
2. Parasitic capacitance inside power supply
Another source of noise in switching power supply is the internal parasitic capacitance. They charge and discharge all of a sudden under the state of switching on and off, especially the parasitic capacitance of the transformer, the capacitance between the semiconductor device and the radiator as well as the capacitance between the wire and the frame. There always exist these capacitors. What we can do to reduce that is to make rational design or layout, and try to control the way of noise. 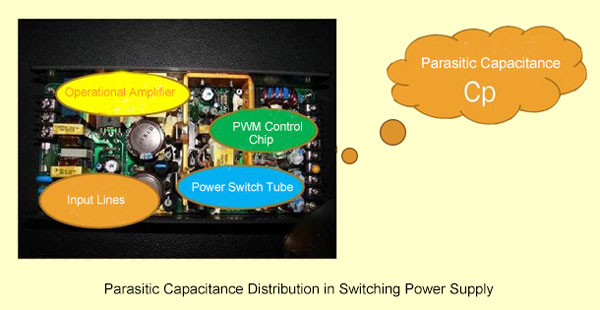 Methods of noise suppression
1. Control the noise source
The current peak caused by the reverse recovery time of the rectifier diode increases the power consumption of the diode itself, so as to enable the switching power tube to generate current peak and increase the consumption in break over. Above all, it is easy to generate noise. Therefore, it had better use the rectifier diode with short reverse recovery time, such as the Schottky diode. It is also suggested that output rectifier diodes should be connected with multiple diodes in parallel to share the load current.
Besides, if possible, it is also a good way of limiting the noise by reducing the switching rate of SMPS appropriately.
2. EMI Power line filter
The natural noise caused by lighting impulse, man-made noise caused by switching on and off will invade from the AC input terminal to the switching power supply.
Therefore, it is an effective way to install an EMI power line filter at input terminal, in order to avoid the malfunction of SMPS and prevent the noise inside the SMPS from leaking out from the input terminal.

3. Shielding
Shielding is an important means to solve the EMC problem by cutting off the transmission of electromagnetic waves. Most of the electromagnetic compatibility problems can be solved by electromagnetic shielding. The biggest advantage of electromagnetic shielding is that it will not affect the normal operation of the circuit.
For switching power supply, it mainly take efforts in the shielding of the shell, high-frequency transformer shielding, switching and rectifier diode shielding as well as control and driving circuit shielding, etc. It is also necessary to improve the shielding effectiveness by a variety of ways.
4. Grounding
The correct grounding not only ensures the safty, but also reduces the electromagnetic interference, that is, eliminate the noise caused by the current in passing through the public ground electrode, avoid the influence of the magnetic field and ground potential difference.

5. Others
In addition to the above measures, there are also other methods for noise suppression. For example, the design of the printing circuit board, position and direction of element installation, layout of the entire circuit and wiring placement are beneficial for reducing the noise of the switching power.