How to Select a Miniature Circuit Breaker?

Miniature circuit breaker, short for MCB, is one of the most widely used terminal protection appliances in building electrical terminal distribution devices. And this article shows the right selection of MCB based on its electrical parameters. 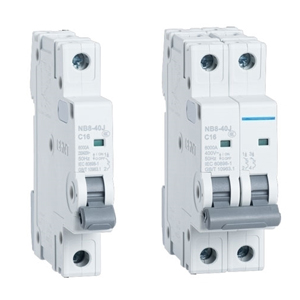 For distribution transformers of different capacities, the short-circuit current at the low-voltage feeder end is different. Generally speaking, for civil residences, small shopping malls and public buildings, because the power supply is supplied by the low-voltage power grid, the MCB with breaking capacity of 4.5kA and above is sufficient. For users with dedicated supply or 10kV substations, MCBs with rated breaking capacity of 6kA and above should be chosen because the cables of the power supply lines are thicker and the power supply distance is short.

MCB is divided into A, B, C, D curve trip characteristics.

For various lines of different nature, be sure to select the appropriate MCB. If there is a circuit of a gas discharge lamp, a large surge current appears when the lamp is started. If the MCB is only used according to the rated current of the lamp, it will cause the MCB to trip by mistake at the moment of turning on the lamp.

In terms of protection characteristics, MCB cannot be used to protect the motor, and can only be used as a substitute for fuses to protect distribution lines (such as wires and cables). At the moment of starting, the motor has a starting current of 5-7In with a duration of 10s. Even if the C characteristic is set to (5-10)In when the electromagnetic tripping current is set, it can ensure that the inrush current is avoided when the motor starts, but the thermal In terms of protection, the action value of its overload protection is set at 1.45In, that is to say, the MCB can only trip when the motor has to withstand an overload current of more than 45%. It is very easy to damage the insulation between the windings, but it is bearable for wires and cables. Therefore, in some occasions, if it is really necessary to use MCB to protect the motor, the MCB external heating relay can be used to protect the motor from overload and short circuit.

Frequency use of MCB

The design and use of MCB is for the 50~60Hz AC power grid. Since the electromagnetic force of the magnetic release is related to the power frequency and operating current, when the MCB used under AC voltage is used for the protection of DC circuits or other power frequency occasions, the operating current of the magnetic release is different. Generally, it should be converted according to the magnetic tripping action current provided by the manufacturer and the coefficient of variation of the power supply frequency.