The lightning stroke discharging between the cloud layer and earth is constituted by one or several individual lightning. Every lightning carries several currents with very high amplitudes and short duration. One typical lightning discharging shall include two or three lightning. There is about an interval of 1/20 second between two lightnings. Most lightning currents drop in the scope of 10, 000 ~ 100, 000 Amp, and its duration is generally lower than 100ms.

Because of the operation of high-capacity equipment and frequency conversion equipment in the power supply system, an increasingly serious interior surge problems have been generated. We conclude it into the influence of transient overvoltage (TVS). Any power equipment has the allowed scope of power supply voltage. Sometimes, even very narrow overvoltage impact might damage the equipment power supply or entire equipment. The destructive effect of transient overvoltage (TVS) is just like this. In particularly, as to some sensitive microelectronics devices, some very low surge impacts will probably case fatal damage.

The surge source of the power supply system is divided into the external reason (lightning) and internal reasons (start and stop, fault of the electrical equipment).

The lightning to the earth can affect the low-voltage power supply system in the following two approaches:

The reason of internal surge occurrence is related to the equipment start and stop of the power supply system, as well as the operation fault of the power supply network. Because of the start and stop of the high-power equipment, circuit fault, switch movement, operation of the frequency conversion equipment in the power supply system, internal surge will be brought, thus having adverse influence to the electric equipment, especially the fatal impact brought by the computer, communication and other microelectronics device. Even if it doesn’t cause permanent device damage, the abnormality and stop in system operation will cause very serious consequence, such as the nuclear power station, medical system, large-scale factory automation system, securities exchange system, interchanger of the telecommunications office, network hub and so on. 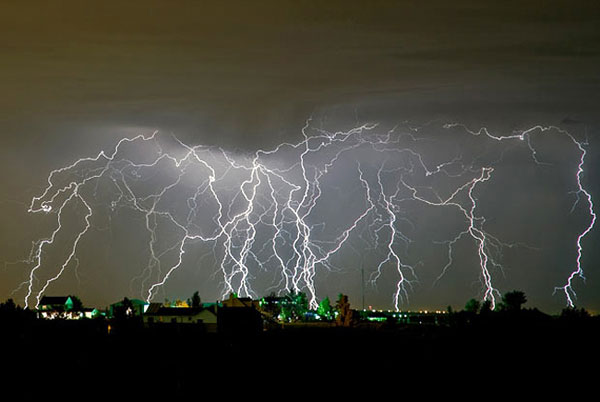 Direct lightning strike is the most serious event, especially if the lightning strike hits the overhead transmission line near the user inlet port. If such event occurs, the voltage of the overhead transmission line will rise to hundreds of thousands of volts, generally causing insulation flashover.  The transmission distance of the lightning current in the power line is one km or farther. The peak current near the lightning stroke point can reach 100kA or higher. In the user inlet port, the current of the low-voltage circuit can reach 5kA ~ 10kA in each phase. In areas with frequent lightning activities, the electrical facility will probably have several serious lightning currents caused by the direct lightning events. However, in areas adopting underground power cables or having infrequent lightning activities, the above events seldom occur.

However, the occurrence probability of indirect lightning stroke and internal surge is relatively high. The vast majority of the apparatus damages are related to such events, so the key point of power supply surge prevention is to absorb and restrain such surge energies.

With regard to the low-voltage power supply system, the TVS protection caused by surge is best to be completed in the format of cascade protection. The absorption of surge energy is conducted gradually from the entrance of the power supply system (such as the general switch board room of the building), so as to conduct grading restraint to the transient overvoltage.

The high-capacity power supply surge protection device should be connected with between various phases of inlet lines of the power supply system and the ground. The power supply protective device is generally required to possess the maximum impact capacity of above 100KA/phase. The required limiting voltage should be lower than 2800V. We call it as CLASS I surge protection device (SPD for short). These power supply surge protection devices are especially designed for sustaining the high current of the thunder and indirect lightning strike, absorbing the high-energy surge energy, so that a large amount of surge currents will be distributed to the ground. They only provide limiting voltage (when the impact current flows through SPD, the maximum voltage happening to the circuit becomes the limiting voltage), which is the medium protection, because the protective device of CLASS I mainly absorbs the high-surge current. The sensitive electrical appliance cannot be completely protected relying on them.

To reach the purpose of completely eliminating the tiny transient overvoltage, a built-in power supply surge protection device is adopted in the inner power supply part of the electrical equipment. The maximum impact capacity required by the power supply surge protection device used here is 20KA/phase or lower. The required limiting voltage should be lower than 1800V. As to some especially important or sensitive electronic device, possessing CLASS III protection is vital. Meanwhile, it can also protect the electrical equipment from the transient overvoltage generated within the system.