I. Basic principle
The principle of plastic extrusion machine is that main engine drive the screw to rotate in the cylinder, so as to push the plastic forward. Then the plastic will be plasticized to be the even melt through the extrusion machine. And with the stress established in the plasticizing process, plastic will be extruded out of the machine head by the screw in constant temperature, constant quantity and constant pressure continuously. The screw is actually a slope or a bevel, which wrap on the central layer. Its purpose is to increase the pressure so as to overcome a bigger resistance. As to one extrusion machine, there are three kinds of resistances to be overcome: the frictional force of the solid particles (feedstock) to the cylinder wall and the mutual frictional force between them in the first several circles of the screw rotating (feed zone), the adhesive force of the melt on the cylinder wall, the interior logistics resistance when the melt is being pushed forward.

In extruding process, the power consumed by the main drive is increasing as the rotating speed increases. It belongs to be a rather typical constant torque load. However, because of the different process materials, some extrusion machine processes require a low rotating speed while others require a relatively high rotating speed. Therefore, as to the transmission of the extrusion machine, it requires having the same output torque between the low speed and rated speed so as to reach the maximum efficiency ratio.
II. Parameter setting of ATO variable frequency drive 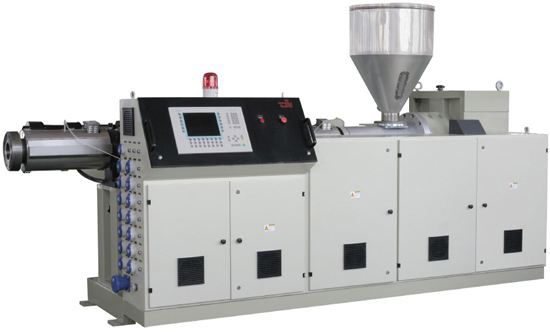