What is a Fiber Laser Marking Machine?

Fiber laser marking machine is a laser with rare earth element doped glass fiber as the gain medium, fiber laser marking machine has become a hot topic in laser physics research in recent years. It is unanimously considered to be a new generation product that has the potential to fully replace solid-state lasers. Fiber laser marker can be developed on the basis of fiber amplifier: the high power density is easily formed in the fiber under the action of pump light, causing the laser working material laser energy level "particle number inversion", when properly added to the positive feedback loop (resonant cavity) can form the laser oscillation output. 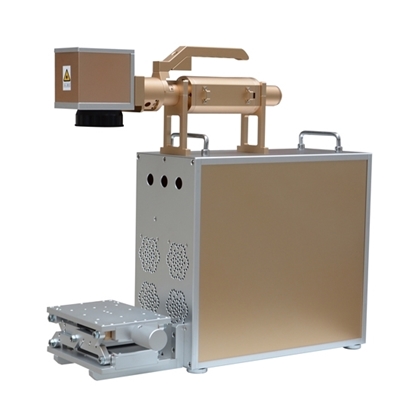 Fiber laser marking machine uses the focused beam of light output from the laser to interact with the target object to be marked. The effect of marking is to reveal the deep material through the evaporation of the surface material, or to "engrave" traces through physical changes in the surface material caused by light energy, or to burn off part of the material by light energy to reveal the desired etched patterns, text, bar codes and other kinds of graphics. This results in a high quality permanent mark on the target object. A schematic diagram of the principle of a typical laser marking machine is given.

The beam output from the laser is controlled by two mirrors mounted on a high speed precision motor to mark the beam in motion. Each reflector moves along a single axis. The motors move very fast and with very little inertia, allowing for fast marking of the target object. The beam guided by the reflector is focused using a lens with the focal point located on the plane being marked. When the focused beam interacts with the marked object, the object is marked. The other surfaces of the object remain unchanged except for the marked position. 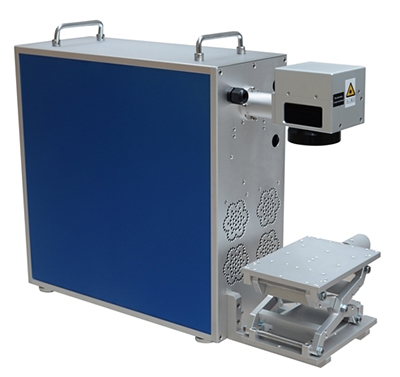 The advantage of fiber laser marker is that it is a glass fiber manufacturing cost is low, the technology is mature, the spare nature of the fiber brings the advantages of miniaturization and intensification. Because there is no optical lens in the resonant cavity of fiber laser, so it has the advantages of adjustment-free, maintenance-free and high stability, which is incomparable to traditional lasers. Fiber laser marker is capable of harsh working environment, with high tolerance to dust, shock, impact, humidity and temperature, and does not require thermoelectric cooling and water cooling, but only simple air cooling, which can greatly reduce the cost.