What is a wind meter?

The wind meter (anemometer) is an instrument that measures the speed of wind. To determine wind speed, wind meters detect changes in certain physical properties of the fluid or the effect of the fluid on a mechanical device inserted into the airflow. There are many types of it. The most commonly used in meteorological stations is the wind cup anemometer. Its sensing part consists of three parabolic cone empty cups fixed on the bracket at 120°to each other. The concave surfaces of the empty cups are all in one direction. The entire induction part is installed on a vertical rotating shaft. Under the action of wind, the wind cup rotates around the shaft at speed proportional to the wind speed.

The flow velocity measurement range of 0 to 100m/s can be divided into low speed 0 to 5m/s, medium speed, 5 to 40m/s, high speed: 40 to 100m/s. The thermal probe of the wind anemometer is used for accurate measurements from 0 to 5m/s, the rotor probe works best for flow velocity from 5 to 40m/s, and the pitot tube gives the best results in the high-speed range. An additional criterion for the correct selection of an anemometer's flow probe is temperature, usually, the temperature of the anemometer's thermal sensor is about +/- 70 degrees. The rotor probe of the special wind meter can reach 350 degrees. Pitot tubes are used above 350 degrees. 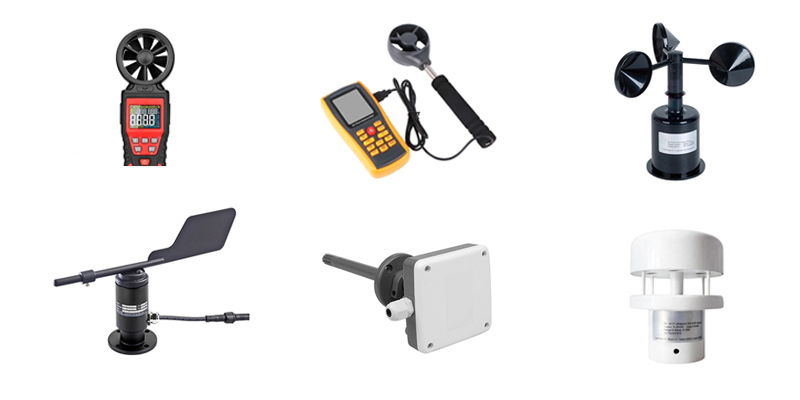 How does a wind meter work?

The working principle of the wind anemometer is to put a thin wire in the fluid, and the wire is heated by an electric current to make the temperature higher than the temperature of the fluid, so the wire anemometer is called a "hot wire". When the fluid flows through the wire in a vertical direction, it will take away part of the wire's heat, causing the temperature of the wire to drop. According to the theory of forced convection heat exchange, it can be derived that there is a relationship between the heat Q dissipated by the heat line and the velocity v of the fluid. Standard hot wire probes consist of two brackets tensioned with a short, thin wire. Metal wires are usually made of metals with high melting points and good ductilities such as platinum, rhodium, and tungsten. The commonly used wire is 5 μm in diameter and 2 mm in length; the smallest probe is only 1 μm in diameter and 0.2 mm in length. According to different uses, the hot wire probe is also made into double wire, three-wire, oblique wire, V shape, X shape, etc. In order to increase the strength, sometimes a metal film is used to replace the metal wire, and a thin metal film is usually sprayed on a thermally insulating substrate, which is called a thermal film probe. Hotwire probes must be calibrated before use.

Static calibration is carried out in a special standard wind tunnel, measuring the relationship between flow rate and output voltage and drawing a standard curve. Dynamic calibration is carried out in a known pulsating flow field or adding a pulsating electrical signal to the heating circuit of the wind meter to verify the frequency response of the hot-wire anemometer. If the frequency response is not good, the corresponding compensation circuit can be used to improve it.