What is a 3-Cup Anemometer?

An anemometer is an instrument that measures the speed of air. There are many types of it, and the three-cup anemometer is widely used. Robinson in the United Kingdom invented the rotating cup anemometer, and it was four cups at that time, and then it was changed to three cups. The three parabolic or hemispherical empty cups fixed to each other on the rack are all in one direction, and the entire rack together with the wind cup is mounted on a freely rotatable shaft. The three-cup anemometer commonly used in meteorological stations is composed of three parabolic cone empty cups fixed on the bracket at 120° to each other, and the concave surfaces of the empty cups are all in one direction. The entire induction part is installed on a vertical rotating shaft. Under the action of wind, the wind cup rotates around the shaft at speed proportional to the wind speed. Another type of rotary anemometer is the propeller anemometer, which consists of a three-blade or four-blade propeller to form a sensing part, which is installed at the front end of a wind vane so that it is always aligned with the direction of the wind. The blades rotate about the horizontal axis at a speed proportional to the wind speed. 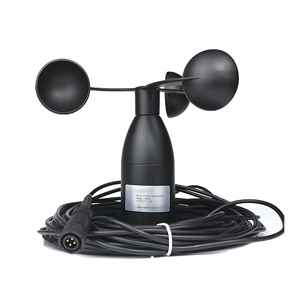 How to detect a 3-cup anemometer?