How to Choose the Anemometer Probe?

The flow velocity measurement range from 0 to 100 m/s can be divided into three zones: low velocity: 0 to 5 m/s, medium velocity: 5 to 40 m/s, high velocity: 40 to 100 m/s. The anemometer thermal probe is used for measurements from 0 to 5 m/s; the anemometer's rotor probe is most effective for velocities from 5 to 40 m/s, and the use of a pitot tube gives the best results in the high-velocity range. An additional criterion for the correct selection of an anemometer flow probe is the temperature, which usually reaches about +-70°C for thermal sensors. Special anemometers have runner probes up to 350C. Pitot tubes are used above +350°C. 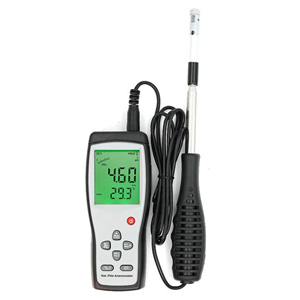 The working principle of the thermal probe for anemometers is based on the cold shock airflow carrying heat away from the thermal element, with the help of an adjustment switch that keeps the temperature constant, then the adjustment current is proportional to the flow rate. When using a thermal probe in turbulent flow, the airflow from all directions strikes the thermal element at the same time, thus affecting the accuracy of the measurement results. When measured in turbulent flow, the thermal anemometer flow sensor often has a higher value than the rotor-type probe.

The above phenomenon can be observed during duct measurements. Depending on the different designs used to manage the turbulent flow in the duct, they can occur even at low speeds.

Therefore, the anemometer measurement process should be carried out in a straight section of the duct. The starting point of the straight section should be at least 10 x D (D is the diameter of the pipe, unit: cm) outside, the end point is at least 4 x D after the measuring point. ATO 0~30m/s hot wire anemometer uses a retractable thermal probe.

The working principle of the anemometer rotor probe is based on the conversion of the rotation into an electrical signal, which first passes through proximity sensing an opening, "counts" the rotation of the rotor and generates a pulse series, which is then converted and processed by the detector to obtain the speed value. Anemometer large diameter probe (60mm, 100mm) is suitable for measuring medium and small flow turbulent flow (such as in the pipe outlet).