Brazed plate heat exchanger must pay attention to keep its welding surface clean, free of dirt and grease when brazing connection. Before heating, the air in pipes and brazed plate heat exchanger must be replaced by using dry nitrogen. Then use a wet cloth to wrap around the root of heat exchanger short tube to protect the heat exchanger. When brazing connections, a welding rod with a silver content of 45% or more must be used. The flame must be weak flame, so that the solder can be evenly fused into stainless steel. At the same time, connecting joint of the brazed plate heat exchanger only needs to be heated to the minimum temperature required for brazing, so that it can be quickly cooled after brazing. Note that the entire brazing and cooling process must be performed under the protection of nitrogen. When cooling, do not immerse the component in water for cooling. Use a damp cloth to wipe the component to accelerate  cooling.

When temperature is lower than 0℃, the water in any heat exchanger is possible to freeze. To prevent the brazed plate heat exchanger from being damaged by low temperature, a drain valve must be installed in the air-conditioning unit. When using brazed plate heat exchanger, pay attention to keep the water circulating and heating, and drain the water when not in use. If necessary, ethylene glycol can be added to the water to prevent freezing. Pay attention to the state inside the evaporator to prevent freezing on evaporator water side. Inlet water temperature is too low, water flow is too small or water is cut off, refrigerant flushing capacity is not enough, etc., all will cause evaporation temperature to be too low. 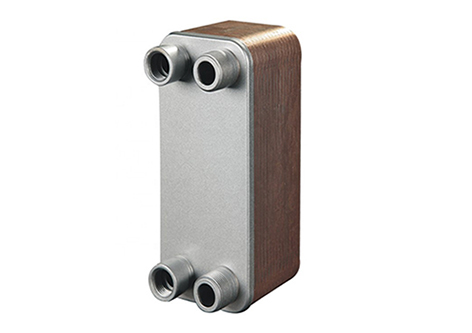 Water hammer is a condition that occurs when an incompressible fluid flows through a pipe and suddenly changes its flow rate. Generally, water hammer occurs when the solenoid valve is suddenly closed. Water hammer may rupture pipes, damage valves and brazed plate heat exchangers. Therefore, delaying the opening or closing of the valve can avoid this phenomenon and protect all equipment in the liquid line.

1. Filtration of insoluble matter. In order to reduce the blockage of the insoluble matter to device, it is recommended to install a 60 mesh/sq.in filter. Pay attention to regular maintenance and cleaning.
2. Avoid corrosion and scaling. Formation of scale is caused by the concentration, temperature, pH value and other factors that cause the crystallization and precipitation of mineral salts, and adhere to the surface of brazed plate heat exchanger. The higher the temperature, concentration, and pH value, the greater the possibility of scale formation.
Stainless steel has high corrosion resistance to most chemicals, but is more sensitive to chloride ions, so its concentration must be limited to less than 300 PPM. Copper used in brazing process is more sensitive to acids and ammonia, so all pH values must be maintained between 6-8. In addition, the pH should be controlled with changes in temperature and saturation to reduce corrosion and scaling. Ammonia medium is not suitable for brazed plate heat exchanger.