How Does a Clamp Meter Work?

As one of the necessary test tools in daily maintenance work, the clamp meter is mainly used to test related parameters such as voltage, current, frequency, etc. It is required to have high test resolution, test accuracy and more test functions. Clamp meter is an instrument that integrates current and ammeter. It is an important branch of digital. Its working principle is the same as that for measuring current. 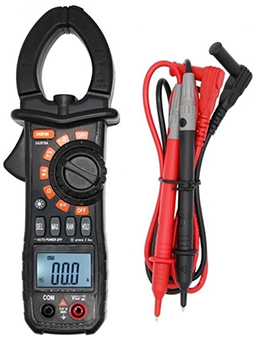 The secondary winding of the through-core current transformer of the clamp-type ammeter is wound on the iron core and is connected with the AC ammeter. Its primary winding is the wire under test passing through the center of the transformer. The knob is actually a range selection switch, and the function of the wrench is to open and close the movable part of the iron core of the through-core transformer, so as to make it clamp the conductor under test.

Usually, when measuring current with an ordinary ammeter, it is necessary to cut off the circuit and stop it before connecting the ammeter for measurement. This is very troublesome, and sometimes a properly functioning motor doesn't allow it. At this point, it is much more convenient to use a clamp meter to measure the current without breaking the circuit.

How to use a clamp meter to measure current?

As a kind of instrument that can detect DC or AC power in the line under the power-on state, the clamp meter will be used in the layout or maintenance of the line in the process of our decoration. How to use such a commonly used tool in our life, and how does it repair the circuit?

After all inspections, it is necessary to make a rough estimate of the measured current under the condition of ensuring that the clamp meter is in good condition, and then select the gear of the clamp meter to be larger than the estimated value. When the clamp meter is first used, there may be instability in the number of hops. This requires waiting for a period of time, waiting for the display value to stabilize before reading.