Sewage pump and sump pump are two types of pumps used in residential and other structures. These two pumps are usually located in the basement of a building and are used as an indoor septic system. Both have a storage tank pump assembly. In sewage pumps, they have an additional alarm. When garbage accumulation reaches a certain level, the alarm is activated. Then, after the waste is ground, it is sent to the sewer system.

In this article, we will introduce the differences between sewage pump in ATO store and sump pump. 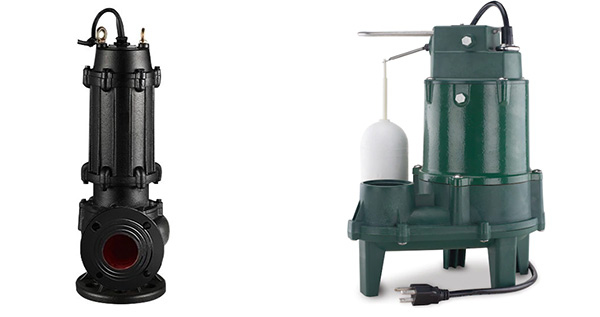 A sump pump is a machine used to drain floodwater or other excess water in the basement of a building. A pool pump is an essential item in many homes, as a sudden flood can cause damage to property, materials, and a building's plumbing system.

Sump pump is usually powered by electricity. In the event of low power, it can be powered by a backup battery. Oil sump pump can also be classified as pedestal or submersible. Pedestal mounts are easier to see and operate, while submersibles, as the name suggests, are sealed and can be lowered into a pool pit, a hole designed to collect water.

In contrast, submersible sewage pump is not only designed to remove water, trash and other small materials from buildings into septic tanks or sewage systems. Sewage pump is often necessary when there are bathrooms in the building.

A sump pump is a machine used to pump out naturally occurring water (not sewage) that might otherwise flood or damage a basement or foundation. Not necessarily required in a basement or crawl space, but usually installed in situations where the water table is high, the drainage system is poor, or gravity is unable to drain the water away from the home.

A industrial sewage pump is similar to a sump pump, except that its primary function is to remove sewage and sewage jet pump particles from a basement sump into a septic tank or municipal sewage system. The eductor that treats waste water has a tight lid on the sump, as well as an exhaust pipe that treats sewer gas.

Sewage water pumps are also known by other names such as sewage ejectors or sewage grinding pumps. Unlike sump pumps, sewage pumps are used to handle solid and liquid waste, solid objects and heavy liquids flushed from buildings or household appliances. Sewage pumps use gravity to send sewage into the piping system. However, conventional sewage pumps can only handle small amounts of solids.

Another difference between sump pump and 3 phase sewage pump is that sewage pumps generally do not require any maintenance. However, there are also cases where the machine fails to start, or a large solid object blocks the access to the machine. In the above scenario, the consequences are delays in waste transport and possible flooding.

Like any other machine or appliance in a building, sump pumps must be regularly inspected and maintained for long-term use and operation. If the building or residence is located in a flooded or flood hazard area, the machine should be inspected more frequently.