What Affects the Indication value of Ultrasonic Thickness Gauge?

Ultrasonic thickness gauges measure thickness according to the principle of ultrasonic pulse reflection. When the ultrasonic pulse emitted by the probe passes through the object to be measured and reaches the interface of the material, the pulse is reflected back to the probe, which is determined by accurately measuring the propagation time of the ultrasonic wave in the material. The thickness of the material being measured. This principle can be used to measure all kinds of materials that can make ultrasonic waves propagate inside them at a constant speed. The thickness gauge designed according to this principle can accurately measure various plates and various processed parts, and can also monitor various pipes and pressure vessels in production equipment to monitor their thinning degree after being corroded during use. Ultrasonic thickness gauges can be widely used in petroleum, chemical, metallurgy, shipbuilding, aviation, aerospace and other fields. 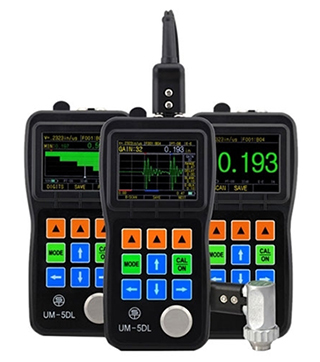 What Affects the Indication value of Ultrasonic Thickness Gauge?