What is AC Synchronous Generator?

AC synchronous generator is a mechanical device that converts other forms of energy into electrical energy. The AC synchronous alternator is driven by a water turbine, steam turbine, diesel engine or other power machinery, which converts the energy generated by water flow, air flow, fuel combustion or nuclear fission into mechanical energy and then transmits it to the generator, at last, it converted into electrical energy by a generator. Brush alternator is widely used in industrial and agricultural production, national defense, science and technology and daily life.

What is AC synchronous generator?

The external characteristics of a synchronous generator generally refer to the curve of the voltage change at the generator terminal when the load current changes when the internal potential is unchanged. It is mainly used to test the longitudinal axis synchronous reactance of the generator, that is, the internal impedance of the generator. It is an important indicator of the load capacity of a synchronous generator. However, synchronous generators mostly use SCR rapid excitation and damping windings, and their longitudinal axis synchronous reactance is mostly transient, which is much smaller than the steady-state value. In addition, due to the adjustment of the excitation system, the external characteristics can be artificially manufactured, which can be positive or negative. The positive external characteristics means that the terminal voltage decreases with the increase of load current, and the negative one means that the terminal voltage increases with the increase of load current. , Generally, the excitation system can be adjusted within the range of plus or minus 15%.

Using the principle of electromagnetic induction to induce electric potential by cutting the magnetic field lines, the mechanical energy of the prime mover is converted into electrical energy output. The AC synchronous generator consists of two parts: a stator and a rotor. The stator is the armature that generates electricity, and the rotor is the magnetic pole. The stator is composed of an armature iron core, a three-phase winding uniformly discharged, a base and an end cover, etc. The rotor is usually a hidden pole type, consisting of an excitation winding, an iron core and a shaft, a guard ring, and a center ring. The excitation winding of the rotor is energized with a direct current, which produces a nearly sinusoidal distributed magnetic field (called the rotor magnetic field), and its effective excitation magnetic flux intersects with the stationary armature winding. When the rotor rotates, the magnetic field of the rotor rotates at the same time, with each revolution, the magnetic lines of force sequentially cut each phase winding of the stator, and a three-phase AC electric potential is induced in the three-phase stator winding. When the AC synchronous alternator is running with a symmetrical load, the three-phase armature current synthesizes to produce a rotating magnetic field with a synchronous speed. The interaction between the stator magnetic field and the rotor magnetic field produces braking torque. From the steam turbine/water turbine/gas turbine, the input mechanical torque overcomes the braking torque to perform work. 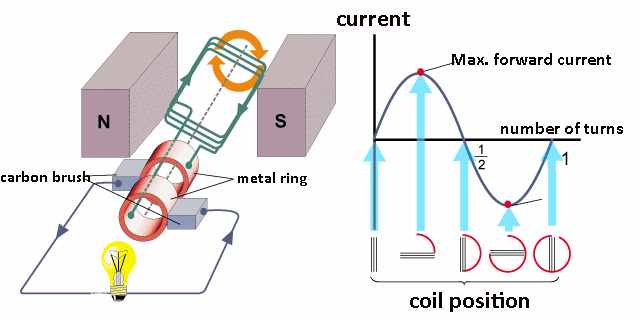