What is a Diesel Generator?

A silent diesel generator is a small power generation equipment, which refers to a powerful machine that uses diesel as fuel and uses a diesel engine as a prime mover to drive the generator to generate electricity. The whole set is generally composed of a diesel engine, generator, control box, fuel tank, storage battery for starting and control, protection device, emergency cabinet and other components. Silent diesel generators with 3 kW~10 kW can be used for daily power generation and emergency power generation in various homes, offices, and large, medium and small enterprises. A generator is a mechanical device that converts other forms of energy into electrical energy.

A diesel generator is a combination of a diesel engine and a generator (usually an alternator) to generate electricity. Diesel compression ignition engines are generally designed to run on fuel oil, but some types are also suitable for other liquid fuels or natural gas. 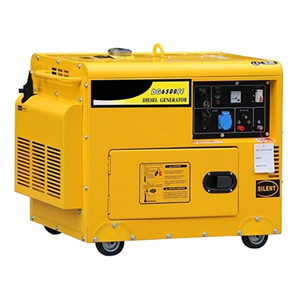 In short, the diesel generator drives the generator to run. In the cylinder, the clean air filtered by the air filter is fully mixed with the high-pressure atomized diesel fuel injected by the fuel injector. Under the upward extrusion of the piston, the volume is reduced and the temperature rises rapidly, reaching the ignition point of the diesel. The diesel is ignited, the mixed gas burns violently, the volume expands rapidly, and the piston is pushed down, which is called work. Each cylinder performs work in a certain order, and the thrust on the piston becomes the force that pushes the crankshaft to rotate through the connecting rod, thereby driving the crankshaft to rotate. By installing the brushless synchronous alternator and the crankshaft of the diesel generator coaxially, the rotor of the generator can be driven by the rotation of the diesel generator and then using the principle of electromagnetic induction, the generator will output the induced electromotive force, and the closed load loop will generate current.

Only the most basic working principle of the generator set is described here. A series of diesel generators and generator controls, protection devices and circuits are also required to obtain a usable, stable power output.

Power supply for daily use: Although diesel generator sets have low power, they are widely used in mines, railways, field construction sites, road traffic maintenance, as well as factories and enterprises due to their small size, flexibility, lightness, complete facilities, and easy operation and maintenance. , hospitals and other departments.

Emergency Power: ATO low-cost diesel generator sets are used where there is no connection to the grid, or as emergency power in the event of a grid failure, as well as for more complex applications such as peak tripping, grid support, and grid output.