3 Ways to Control the Servo Motor

Servo motor is also called execution motor. Its working principle is similar to that of a two-phase asynchronous motor. However, because it is used as an actuator in a CNC machine tool to convert an AC signal into an angular displacement or angular velocity on the shaft, the speed of the rotor speed is required to reflect the phase of the control signal. It does not rotate when there is no control signal.

The rotor inside the servo motor is a permanent magnet. The U/V/W three-phase electricity controlled by the driver forms an electromagnetic field. The rotor rotates under the action of this magnetic field, and at the same time, the encoder of the motor will feedback signals to the driver. The driver compares the feedback value with the target value to adjust the angle of rotation of the rotor.

Servo motors are often used. It can be used in common industrial and civil occasions that are sensitive to cost. We need to understand some of its basic knowledge, such as control methods and control principles. Only by understanding this knowledge can it be operated correctly. Let's learn how to control the servo motor below. 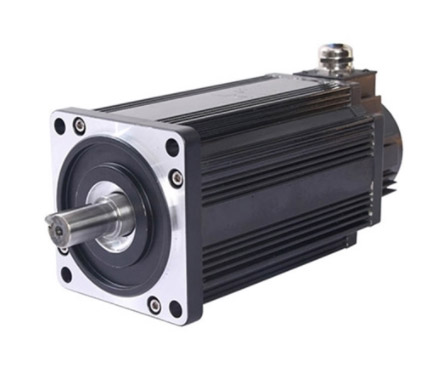 The position control method generally determines the rotation speed by the frequency of externally input pulses, and determines the rotation angle by the number of pulses. There are also some servo drives that can directly assign speed and displacement through communication. Because the position mode can have very strict control on speed and position, it is generally used in positioning devices, such as CNC machine tools, printing machinery and so on.