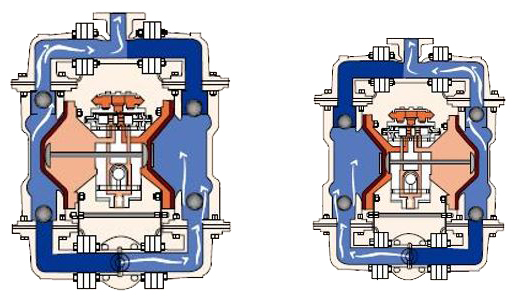 The air source pressure only needs to be more than two kilograms per square centimeter to work. Under the working pressure of 5 to 8 kg, the high-pressure gas in the valve chamber drives the connecting rod shaft to reciprocate left and right through the airflow dredging system, and at the same time, the consumed low-pressure gas is quickly discharged through the exhaust port. Under the alternating action of high and low pressure gas on both sides, the connecting rod shaft drives the diaphragms on both sides to move left and right, so that the air pressure in the volume chambers on both sides changes alternately, so as to realize the continuous suction and discharge of liquid.

Figure 1: The air is compressed into the back of the air chamber B through the air valve, and the liquid chamber is squeezed by the diaphragm. This air-driven way can relieve the mechanical stress of ordinary piston drive, thereby significantly prolonging the life of the diaphragm. When the compressed air pushes the air chamber B away from the central body, the air chamber A at the other end is simultaneously pulled toward the central body by the connected central shaft. At this time, the air at the back of the air chamber A is discharged to the outside of the pump through the outlet. In this way, the B chamber is formed into a vacuum state, so that the fluid can be pushed from the inlet branch pipe by the external atmospheric pressure to push the valve ball away from the valve seat, so that the fluid can freely enter the B chamber until it is filled.

When the movement of the diaphragm is completed, the air valve guides the air to the back of the air chamber B again, while the air chamber A performs the air discharge action. When the pump returns to the original starting state, the two diaphragms in the pump each complete an air discharge or fluid discharge process. This constitutes a cyclic pumping process. Depending on the conditions of use, the pump achieves self-priming through several complete pump cycles.