The Diaphragm pump, also known as control pump, is the main type of actuator. It changes the fluid flow with the help of power operation by receiving the control signal output by the adjustment control unit. The function of the diaphragm pump in the control process is to accept the control signal of the regulator or computer, change the flow rate of the adjusted medium, and maintain the adjusted parameters within the required range, so as to achieve the automation of the production process. To realize the adjustment and control of a certain parameter of the process, such as temperature, pressure, flow, liquid level, etc., the diaphragm pump is inseparable.

The pneumatic diaphragm pump uses compressed air as the power source. It is a positive displacement pump whose volume changes due to the reciprocating deformation of the diaphragm. Its working principle is similar to that of a plunger pump.

The motor on the electric diaphragm pump drives the diaphragms on the left and right end plungers to reciprocate one after the other through the gear box. In the left and right pump chambers, the movement of the upper and lower four one-way ball valve diaphragms causes the change of the volume in the working chamber, forcing the four one-way ball valves to open and close alternately, so as to continuously suck and discharge the liquid. 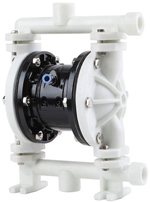 Air operated double diaphragm pumps are powered by compressed air, nitrogen or natural gas. The main directional (pneumatic) control valve distributes compressed air to the gas chamber, applying uniform pressure to the inner surface of the diaphragm. At the same time, the discharged gas is discharged from the rear of the other side of the pump through the guide port of the gas valve assembly. The air diaphragm pump mechanically pulls the suction diaphragm through the stroke. The inner plate of the pneumatic double-diaphragm pump contacts the aligned drive plunger, and moves the guide valve core. After the pilot valve is activated, a pressure signal is sent to the other end of the main directional air valve, and the AODD pump changes the direction of the compressed air to the other side of the internal chamber.

How to Choose a Diaphragm Pump?

The selection of the valve body type of the diaphragm pump is the most important link in the option of the diaphragm pump. There are many types of diaphragm pump valve bodies, including straight-through single-seat, straight-through double-seat, angle, diaphragm, small flow, tee, eccentric rotation, butterfly, sleeve, spherical, etc. Before selecting a valve, it is necessary to carefully analyze the medium, process conditions and parameters of the control process, collect enough data, understand the requirements of the system for the diaphragm pump, and determine the type of valve to be used according to the collected data. In the specific selection, the following aspects can be considered:

Since the diaphragm pump has some incomparable characteristics of the traditional pump, the diaphragm pump in the world has gradually invaded the market of other pumps since its birth, and occupies a part of the market. Diaphragm pumps have an absolute dominant position in the paint and ceramic industries. In some other industries, such as environmental protection, wastewater treatment, construction, sewage, and fine chemicals, it is expanding its market share and has an irreplaceable position with other pumps. The diaphragm pump can absorb all kinds of corrosive liquids, liquids with particles, high viscosity, volatile, flammable and highly toxic liquids. Pneumatic pumps are reliable and low-cost in flammable and explosive environments, such as the delivery of fuel, gunpowder, and explosives. It can still work stably in harsh construction sites, such as construction sites, industrial and mining wastewater discharge environments.