What is an Absolute Encoder?

An absolute encoder has a unique code for each shaft position which represents the absolute position of the encoder. The shaft encoder directly provides the digital output representing the absolute displacement. The value of the actual position is measured immediately the moment the system is switched on. Thus, an absolute encoder doesn’t need a counter as the measured value is derived directly from the graduation pattern. It provides the digital output corresponding to the position directly. Each bit position is separately encoded through a dedicated LED pair. encoders. 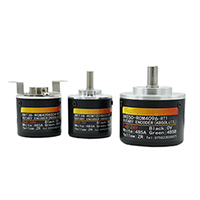 What is an Incremental Encoder?

Incremental encoder is an electro-mechanical device that transforms the angular position of the shaft into digital or pulse signals. It generates a certain number of pulses per revolution, providing a pulse for each increment corresponding to the revolution. It can measure the change in position, not the absolute position. Therefore, it cannot specify the position relative to a known reference. The number of pulses generated is proportional to the angular position of the shaft. High resolution incremental encoders are used in applications where a velocity or a velocity and direction information is required. Every time the device is switched on or reset, it begins counting from zero and it generates an output signal each time the shaft moves. The types of an incremental encoder maybe further subdivided into quadrature encoders and tachometers. 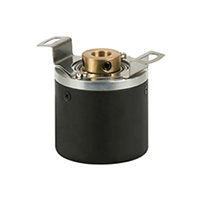 So, what is the difference between an absolute and an incremental encoder? Let's take a detailed look at how they differ from each other.

Our incremental encoders have an LED on one side of a transparent disk and a photo detector chip on the other. The disk has a series of lines and windows on it. The windows allow light to be transmitted from the LED to the chip. The lines do not. This alternating pattern of light is how the encoder reports position information back to the mechanical system. Each set of lines and windows looks identical. Incremental encoders can determine relative shaft position based on the number of windows and lines that pass in front of the detector chip. If power is lost and then restored, that relative position is lost. In some applications, for instance when using an encoder to determine speed, distance or direction of movement - this may be perfectly fine. In other applications an exact position is needed. The only way for an incremental encoder to report its exact position after it's been power cycled is for the shaft to rotate until the encoder reaches Index (if it has one). If you're designing a system where it's critical that you know the exact shaft position, including after power to the encoder has been cycled, you should consider an absolute encoder. 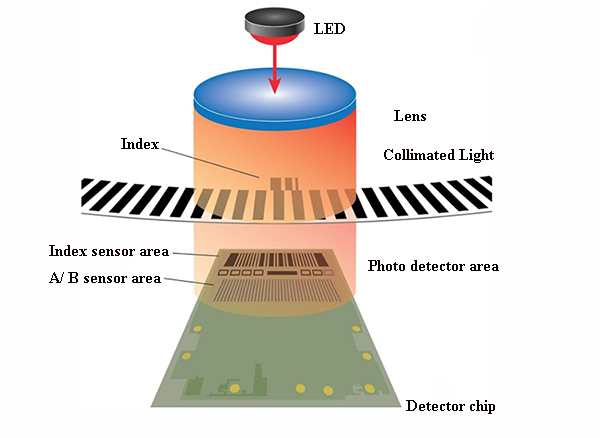 The absolute encoder outputs pulses when it rotates, and calculates its position through the counting device. When the encoder does not move or power failure, it relies on the internal memory of the counting device to remember the position. There are many optical channel engraving lines on the absolute encoder optical disc, and each engraving line is arranged with 2 lines, 4 lines, 8 lines and 16 lines in turn, so that at each position of the encoder, by reading each engraved line A set of unique binary codes (Gray code) from the zero power of 2 to the n-1 power of 2 are obtained, which is called an n-bit absolute encoder. Such an encoder is determined by the mechanical position of the photoelectric encoder, and it is not affected by power failure and interference.

2. Different working methods
Incremental encoder needs to go back to the origin after power off. It cannot output the absolute position information of shaft rotation. There is zero accumulated error, and the anti-interference is poor. The receiving equipment needs to be powered off and memorized when it is turned off.
The absolute encoder does not need to go back to the origin, it is coded by the mechanical position, no need to memorize, it needs to find a reference point, and it does not need to count all the time. When you need to know the position, you can read its position.

3. Cost Efficiency
The code matrix of the encoder disk is more complex and because more light sensors are required, an absolute encoder typically costs twice as much as the incremental encoders. The resolution is limited by the number of tracks on the encoder disk, so it becomes more expensive to obtain finer resolutions without adding more tracks. Incremental encoders, on the contrary, are less complex than their absolute counterparts, thus typically less expensive.

4. Stability
Thanks to absolute encodersability to provide absolute angle readings, even if a reading is missed, it won’t affect the next reading. A particular reading is not dependent on accuracy of a previous reading. An incremental encoder, on the other hand, needs to be powered on throughout the operation of the device. Each time the power is lost, the reading must be reinitialized or the system shows an error.

In a nutshell, both absolute encoders and incremental encoders have their own advantages and disadvantages. The difference list is as follows: