The working principle of incremental rotary encoder is shown in the figure below.

Through the output waveform diagram, we can know that the sequence of each motion cycle is:

The incremental encoder actually used outputs three groups of square wave pulses A, B and Z (some are called C-phase). The phase difference between the two groups of pulses A and B is 90º, and the rotation direction and rotation speed can be judged. The Z-phase pulse is also called the zero pulse (sometimes also called the index pulse), which outputs a pulse for each revolution. The Z-phase pulse represents the zero reference bit. Through the zero pulse, the zero reference bit of the encoder can be obtained. Used for datum point positioning, as shown in the figure below. 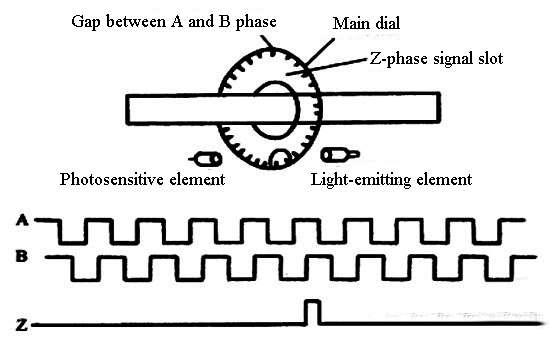 When the shaft of the incremental encoder rotates, there is a corresponding pulse output, and its counting starting point can be set arbitrarily, which can realize multi-turn infinite accumulation and measurement. One rotation of the encoder shaft will output a fixed number of pulses. The number of pulses is determined by the number of lines of the grating on the encoder code disc. The number of pass or dark lines provided by the encoder per 360-degree rotation is called resolution, also known as resolution. It is called resolution division, or how many lines, generally 5 to 10,000 lines per revolution. When the resolution needs to be improved, the A and B signals with a 90-degree phase difference can be used to multiply the frequency or replace the high-resolution encoder.

Incremental encoder accuracy depends on mechanical and electrical factors such as: grating indexing error, disc eccentricity, bearing eccentricity, errors introduced by electronic readout devices, and inaccuracies in the optics, which exist in any encoder. 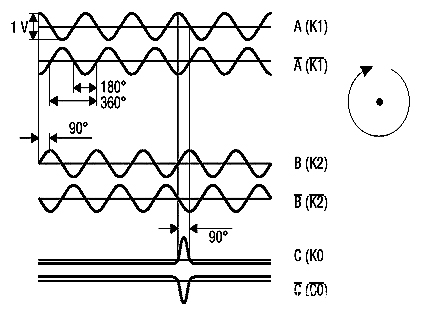