What are the Types of Encoders?

The encoder can convert the mechanical geometric displacement on the output shaft into pulse or digital quantity. This is the most widely used sensor at present. Since the photoelectric encoder is coaxial with the motor, when the motor rotates, the encoder (grating plate) rotates at the same speed as the motor, reflecting the current speed of the motor. It is mainly composed of four parts: light source, code disc, optical system and circuit. Then we will explain according to different kinds of encoders. 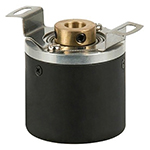 The incremental rotary encoder can convert the displacement into a periodic electrical signal, and then convert the electrical signal into a counting pulse. Rotate the incremental encoder to output pulses when rotating, and know its position through a counting device. And the position is calculated from the zero mark. The number of pulses is determined. When the power is off, the encoder cannot move. When the power is turned on again, the encoder output pulse process, and there can be no interference and loss of pulses, otherwise, the zero point of the counting device memory will be offset. Incorrect results are difficult to find, and if the reference point cannot be accurately located, the accuracy of the position cannot be guaranteed. Therefore, each operation must first find a reference point. But such an encoder is not affected by power failure and interference.

Incremental encoder can output three groups of square wave pulses A, B and Z using the principle of photoelectric conversion. The phase difference between the two groups of pulses A and B is 90 degrees, which can determine the rotation direction of the motor, and the Z phase 9 is one revolution per revolution. Output a pulse for reference point positioning. The encoder principle is simple in structure, mechanically average, and has a life span of tens of thousands of hours. It has strong anti-interference ability and high reliability. However, the absolute position information of the shaft rotation cannot be output.

Each position of the absolute encoder corresponds to a certain digital code, so its indication is only related to the starting and ending positions of the measurement. It has nothing to do with the intermediate process of measurement. Its position is determined by the reading of the output code. When the power supply is disconnected, the absolute encoder is not separated from the actual position. When power is cycled, the position reading is still current.

The absolute encoder can directly output a large number of digits, and there will be several code channels on the code disc, and the number of code channels is a single digit. Each code track is composed of light-transmitting and light-unlighted fan-shaped areas, and the signals are collected by using photoelectric sensors. A light source and a photosensitive element are respectively arranged on both sides of the code disc, so that the photosensitive element can perform level conversion according to whether it receives an optical signal or not, and output a binary number. And output different digital codes at different positions. Thereby, the absolute position can be detected. But the resolution is determined by the number of binary digits, that is to say, the precision depends on the number of digits. Advantages: The absolute value of the angle coordinates can be read directly, there is no accumulated error, and the position information will not be lost after the power is cut off. The anti-interference characteristics of the encoder and the reliability of the data are greatly improved.

Hybrid absolute encoder outputs two sets of information: one set of information is used to detect the magnetic pole position, with the function of absolute information, and the other set is completely the same as the output information of the incremental encoder.

Resolver is composed of high-performance silicon steel laminations and enameled wires with special electromagnetic design. Compared with encoders using photoelectric technology, it is heat-resistant and vibration-resistant. Adaptability to harsh working environments such as impact resistance, oil resistance, and even corrosion resistance. The resolver of the opposite pole (single speed) can be regarded as a single-turn absolute feedback system, and it is also the most widely used.

The sine-cosine servo motor encoder can make the servo driver obtain high-precision subdivision without using high-frequency communication, which reduces the hardware requirements. At the same time, due to the single-turn angle signal, the servo motor can start smoothly and the starting torque is large.