How to Choose a Right Power Inverter for Car?

Inverter is a kind of transformer converting the low-voltage DC power (usually such as the power output by the battery) into the high-voltage AC high-frequency power (sine wave AC power of 220V 50Hz or 110V 60Hz). Take a 12V DC to 220V AC car power inverter as example to illustrate the working principle briefly. Firstly, the 12V low-voltage DC power in the vehicle is converted into the high-voltage DC power of around 265V, and then the 265V DC power is converted into the sine wave AC power of 220V, 50Hz. The main inner components of power inverter include the Inverter Bridge, filter circuit, oscillator, control logic circuit and so on.

First of all, to the ordinary families, purchasing an inverter with the maximum limitation power of below 200W is enough. The 12V power supply for a majority of family cars is safely used lower than or equivalent to 20A, namely, the electrical appliance used can reach 230W to the maximum. Some older vehicle types even only allow the maximum current of 10A, so high power is not always the best in choosing the car power inverter. At present, most of the inverters connected to 12V power supply can be used for the electrical appliances below 150W.

As to the level of the power inverter, in addition to the traditional point of material and brand, the performance is quite different. At present, there are mainly pure sine wave and modified sine wave inverters on the market, in which, the pure sine wave power inverter has a relatively high sales price but very stable performance. Some high-end products’quality is even higher than the quality of our daily power. However, the modified sine wave power inverter which belongs to the square wave type can be ensured of the stability in most conditions. It is the inverter with high cost performance which is suitable to the ordinary consumers. The following table is a comparasion of different waveform power inverters.

The maximum current sustainable by vehicle 12V power supply insurance is not too high. Of course, there is no unified standard. In most conditions, various vehicle plants design the maximum allowed current as 15A or 20A. There are also a few vehicles, especially some old vehicles, use the insurance of 10A. Therefore, when we are using the inverter used in the ordinary vehicle, you must clearly comprehend the maximum allowed current of the insurance corresponding to the 12V vehicle-mounted power supply. High frequency is not always the best. Using the electrical appliance of a higher power has no other advantages except burning the insurance of your car.

Most digital products in our daily life, such as cellphone, camera, PC, tablet and so on require very low power in charging. Few of them require the power of exceeding 100W. We can feel relieved to use them. However, some heating devices used during the self-driving tour usually have high powers. For instance, the electric hair-drier, quick heater, hot-water bag and so on normally have the power of over 1000W, so they cannot be connected with the power inverter in the car. 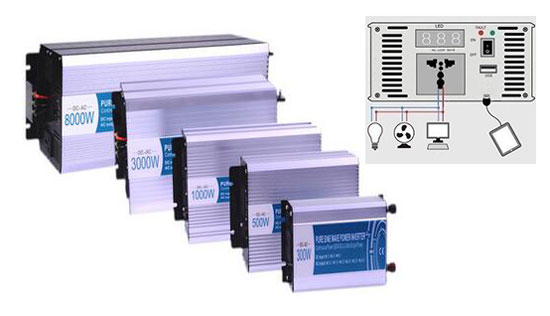