How to Detect Photoelectric Sensor? 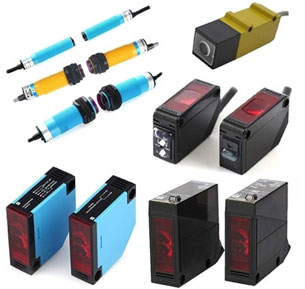 A detection mode that can detect small objects is called the focused mode. Most focus sensors add a lens to the transmitter, so as to ensure the emitted light is focused at a point in front of the lens. Meanwhile, the focus of receiver focus is also here. Thus a small detection area of energy concentration is formed at a fixed distance.
Fixed-field type
Fixed-field sensor is a kind of photoelectric proximity sensor. It has a clear detection range and can ignore objects outside this range without being affected by the surface reflectivity of the object.
Adjustable-field type
Like the fixed-field type, the adjustable-field sensor can distinguish objects at different distances. In this case, the detection distance is adjustable. The receiver of adjustable-field sensor can produce two current of I1 and I2, whose ratio varies with the location of the reflected light on the receiver. The location of the sensor's cut-off point is directly related to this ratio, and the position of the cut-off point can be adjusted by potentiometer, even if the objects outside of the cut-off point have strong reflectors, the sensor still ignores them.
Optical fiber type
Actually, optical fiber is not a specific detection mode, different optical fibers can form different detection modes. Separating optical fiber can be used to form the opposite detection mode, the integrated optical fiber can form the reflective plate or proximity detection mode. Special fiber can be customized. Special structures have been used on the detection end of the optical fiber, which forms the focus detection lens.
Ultrasonic proximity mode
After the AC voltage is supplied, the ultrasonic generator vibrates. This vibration alternately compresses and strikes air molecules to transmit ultrasonic waves continuously. Meanwhile, the ultrasonic generator can also receive the echo of the ultrasonic wave.