How to Use a Through Beam Photoelectric Sensor?

Photoelectric sensor is controlled by converting changes in light intensity into changes in electrical signals. Photoelectric sensor is generally composed of three parts, which is divided into transmitter, receiver and detection circuit. The transmitter is aimed at the target and emits a light beam, which generally originates from semiconductor light sources, light emitting diodes (LEDs) and laser diodes. The beam is fired uninterrupted, or the pulse width is changed. The receiver consists of photodiodes or phototransistors. In front of the receiver, optical elements such as lenses and apertures are installed. Behind it is the detection circuit, which filters out the valid signal and applies it. The through beam type is that the transmitting end emits red light or infrared light, and the receiving end receives it. When an object is cut off by the light, a signal is output. How to use a through beam photoelectric sensor?

This is an ATO through beam photoelectric sensor.

We set up a security alarm system according to the circuit diagram. 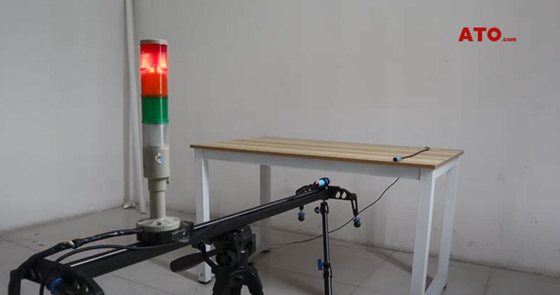 When someone passed between the transmitter and receiver (photoelectric sensor receiving signal is blocked).
The sensor will be triggered and the warning light will be activated.

You can view the video below to learn more about how to use photoelectric sensor/infrared sensor.