What is Inside an Electric Hub Motor?

After the hub motor is energized, the motor converts electrical energy into mechanical energy, thereby driving the wheels to rotate and driving the vehicle forward. Hub motors are mainly composed of 6 structures: stator core, stator winding, machine base, rotor core, rotor winding, and other accessories of phase asynchronous motor. Now ATO will tell you the details of electric hub motor structures.

The stator core is part of the motor magnetic circuit, and on which the stator winding is placed. It is generally made of 0.35~0.5mm thick silicon steel sheet with an insulating layer on the surface, laminated, and evenly distributed slots are punched in the inner circle of the core to embed the stator winding.

The stator winding is the circuit part of the electric hub motor, which is connected to the three-phase alternating current to produce the rotating magnetic field. It is connected by three identical windings with the same structure, which are spatially separated by 120°electric angle and arranged in a team. The coils of these windings are embedded in each slot of the stator according to a certain rule to ensure reliable insulation between the conductive parts of the winding and the core and between the winding itself. 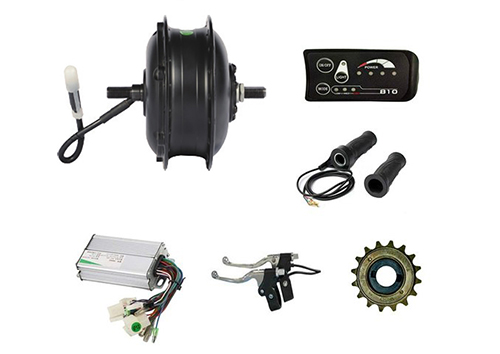 The rotor winding of a three-phase asynchronous motor cuts the stator rotating magnetic field to produce induction electric potential and current, and form electromagnetic torque to make the motor rotate. It is divided into a squirrel-cage rotor and wire-wound rotor. The structure of the wire-wound motor is more complicated and not as widely used as a squirrel-cage motor, but the additional resistors and other components are strung in the rotor winding circuit through current collecting ring and brush to improve the starting and braking performance and speed regulation performance of asynchronous motor, so it is used in the equipment requiring smooth speed regulation within a certain range, such as crane, elevator, air compressor and so on.

6. Other accessories of phase asynchronous motor