Magnetostrictive sensor indicates a kind of displacement detecting device developed based on ferromagnetic material magnetostrictive effect. It could be used for continuously, precisely and real-time detecting the displacement (position) and velocity of various moving parts under abominably industrial environment. As an important component to realize precise operation and control, it can substantially enhance the precision and efficiency of the whole system. It is applicable for detecting the stroke or position of mechanical device with rectilinear motion. Precision servo feedback control of hydraulic system is one of the most typical applications.
Magnetostrictive sensor is used for measuring linear displacement. It's composed of magnetostrictive sensitive element (waveguide), electrical circuit, protection housing and non-contact magneto ring. As the figure 1 shows, when magnetostrictive sensor is working, circuit generates a start pulse, this pulse transmits along the waveguide, at the same time it generates a helical magnet field along waveguide direction, when the magnet field and magnet field of non-contact magnet ring meets, waveguide generates magnetostrictive effect, that is, generate a mechanical wave and transmit to circuit along waveguide, this mechanical wave transmits at constant speed V, energy pick up mechanism in circuit part converts this mechanical wave to a weak electrical signal, after amplified, then get a end pulse, figure out time difference T between start pulse and end pulse. Finally, displacement value L=VT. 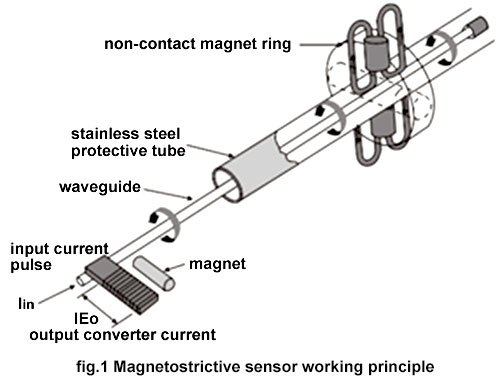 Figure 3 is magnetostrictive displacement sensor for hydraulic cylinder built-in installation drawing. The magnetostrictive sensor is rigidly connected to the rodless end of the cylinder and completes the full stroke length in the hollow piston rod. The magnet ring is connecting the to the piston of the cylinder. When the piston moves along the stroke, the sensor can precisely determine the position of the piston (or magnet).