A stepper motor is an actuator that converts electrical pulses into angular displacement. When the stepper driver receives a pulse signal, it drives the stepper motor to rotate a fixed angle in the set direction, and its rotation runs step by step at a fixed angle. The angular displacement can be controlled by controlling the number of issued pulses, so as to achieve the purpose of controlling the displacement. At the same time, the speed and acceleration of the motor rotation can be controlled by controlling the pulse frequency, so as to achieve the purpose of speed regulation. The rotor inside the servo motor is a permanent magnet. The U/V/W three-phase electricity controlled by the driver forms an electromagnetic field. The rotor rotates under the action of this magnetic field. At the same time, the encoder that comes with the motor feeds back the signal to the driver. The target value is compared and the angle of rotor rotation is adjusted. The accuracy of the servo motor is determined by the resolution of the encoder. So what are the differences between stepper motor driver and servo motor driver? 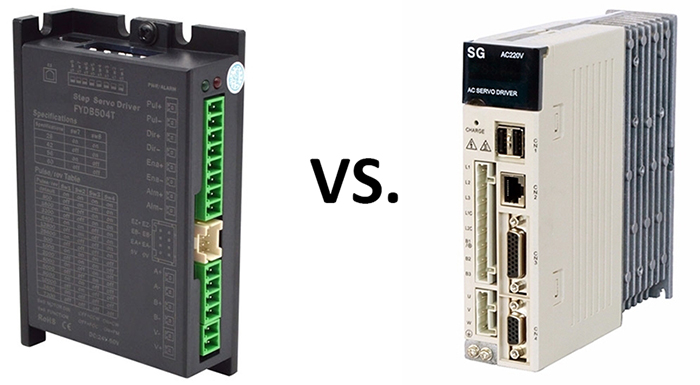 Servo drive: It is a controller used to control servo motors. Its function is similar to that of frequency converters acting on ordinary AC motors. The servo motor driver is part of the servo system and is mainly used in high-precision positioning systems. Generally, the servo motor is controlled by three methods of position, speed and torque to achieve high-precision positioning of the transmission system. It is currently a high-end product of transmission technology.