Tips for Installing the Linear Scale

The effective movement of the linear scale should be larger than the maximum travel of the worktable. If it is not long enough, change a longer one or install fixing blocks on the worktable. Not less than 10mm space should be spared between the end of the Read Head and the body of the scale.

More than 0.5mm space must be spared between the dust-proof cover and the body of the scale. Allow no contact between them when moving the scale.
The screw thread of the installation hole must have at least, a 6-threading die screwing depth. The part which bears more pressure, such as the fixing board for supporting the DRO, must have, at least, an 8-threading die screwing depth. WTA series linear scale is tightened with M4 screw, and WTB with M5. After drilling holes on the installation surface, you have to smooth the granulated surface and clean the paint and the stains.

You must consider all the relevant moving distances before fixing the signal cable. The fixing position should be placed in the middle of the track as possible as you can. And then well bundle the surplus cable.

Make sure that the ground wire is grounded, and measure from the cover of the Read Head to the ground terminal of the signal processing device with a volt-ohm meter (the ground connector of the DRO). confirm the resistance is not more than 0.30 (Resistance≤0.30). 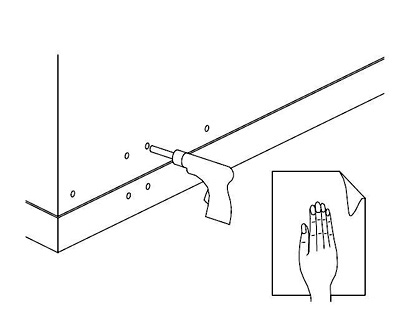