I. Overview
The hydroextractor is widely used in the dyeing, washing water and weaving in the textile industry as well as the dehydrating of the washing material in hotels. The modern hydroextractor must satisfy the requirements of different revolving speeds for different materials. Therefore, the revolving speed of the hydroextractor must be able to be regulated, so as to reach the technological requirements. In the past, most hydro extractors adopted the high and low motors. The low-speed acceleration and deceleration motor is used for feeding and discharging in low speed. The high speed revolving is driven by another motor. In deceleration, mechanical brake is used. The transmission system is rather complicated, with a high failure rate. Because the high-speed motor has a rather big capacity, combining the high inertia of the dewatering tank, the starting current is extremely high and the lasting time is rather long. 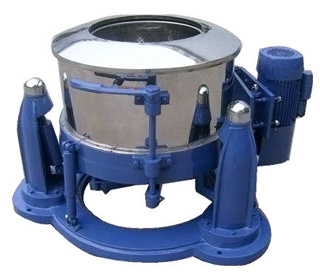 Furthermore, it has a low operating efficiency. And the speed is unable to be regulated.
In recent years, VFD has been keeping on updating and developing as a kind of industrial controlling device. It has wide application in various industries. As the power electronic technology, frequency control theory, microcomputer control technology are becoming more and more matured, the performance of the VFD has been improved and the functions have also been intensified, such as: multi-stage speed, programmable automatic operation, communication function and so on. So VFD can be used in many situations.
According to the manufacturing technology of the hydroextractor, the multi-speed functional control of the VFD can be used. The hydroextractor with VFD control system belongs to the approximate constant torque load with big inertia. Therefore, the system requirements can be reached by configuring braking unit and braking resistor on the basis of selecting the AC converter. The built-in braking unit of the 30hp VFD and below power can not only save space, but also save the cost.
II. Control principle
High-speed dehydrating, low-speed cloth feeding and discharging.