What is LED Indicator Light?

As the name implies, indicator lights reveal the status (ON or OFF) of an electrical apparatus in switchboards. In more sophisticated systems, the indicating lights may annunciate the cause of the current interruption, such as line-to-ground fault, overload, and overcurrent condition.

The customer usually selects the color of the lights for a particular indicating function. In selecting indicating lights, it is of paramount importance to know their voltage and resistance rating because these parameters establish the minimum current rating of the contact that controls the switching of the indicator lights. In ATO.com, we offer accurate parameters for you.

A motor's fuses, circuit breakers, magnetic starters, and relays are all housed within a metallic cabinet, located on what is commonly known as a motor control center, on the front panel where the indicator lights and the start-stop push buttons are located. 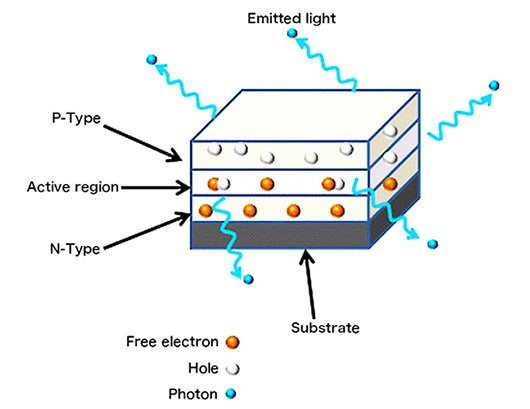 The LED structure consists of three semiconductor layers deposited over the substrate. The top layer is a P-type region, the bottom layer is the N-type region, and the central layer is called the active region of the LED. As the name suggests, the P-region consists of a large number of holes, and the N-region consists of a large number of electrons. The middle layer, i.e, the active region, consists of both the holes and electrons. The N-type region is heavily doped as compared to the P-type region in the LED structure. The P-layer is deposited above the N layer because the electron-hole pair recombination takes place towards the P region, hence if the P region is the upward surface of the LED, the light (photons) emitted due to the electron-hole pair recombination can be clearly observed from the surface.

If the P region is placed below the N region, then the light emitted from the LED may not be clearly observable, which is why the P-type layer is always placed above the N-type region. The P-type layer is covered with the thin metallic layer which provides the anode connections, and the N-type region is coated with the thin gold layer, which provides the cathode connection. The gold film also acts as a reflective layer in the LED structure. If some part of the light emitted at the upper surface of the led enters the bottom surface, then the gold layer reflects the light back to the upward direction, hence the gold film increases the efficiency of the LED. A transistor is used in the circuit to switch on or switch off the LED. The LED structure is encapsulated in a transparent dome-shaped case, which ensures that the minimum internal reflections and uniform light distribution of LED. The semiconductor materials that are commonly used for the construction of LEDs are Gallium Phosphide, Gallium Arsenide, or Gallium Arsenide Phosphide.