LED indicator light control system, X-ray collimator is an important component of X-ray machine. Two sets of adjustable screen lead plates are used to define the X-ray exposure field in X-ray emission.Lies in its features, including PC and single chip microcomputer system, camera, motor drive circuit, two dc motors, camera installed in the LED indicator light out of the mouth on the shell of light, and make your camera vision, camera to PC, PC output instruction transmitted by serial port to the single-chip microcomputer system, single chip microcomputer system after processing the data, the output through the motor drive circuit to control the led indicator light, and the longitudinal and transverse two dc motor are, inversion, two groups of driven by two dc motor regulation line lead plate movement. 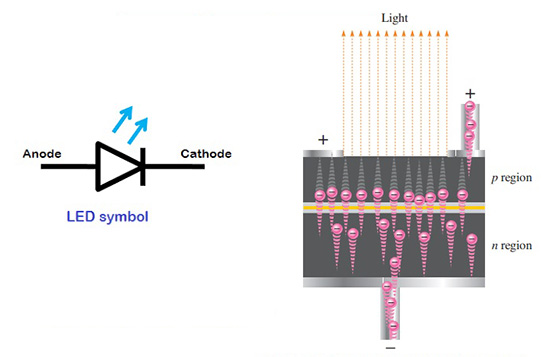 The LED indicator light in automation online shop is digitized and the control accuracy is improved. It can be operated remotely and the work of doctors can be simplified to improve work efficiency. And the circuit volume is small, achieved the goal of saving. It is used to block X-ray scattering, reduce X-ray injury to patients and improve imaging quality. X-ray diagnostic machine is an indispensable part. ATO LED indicator light through manual knob to adjust the blade size of the window, which is easy to operate and can reduce the working pressure of operators.

The working principle of LED works on the quantum principle. According to quantum theory, electrons move from high energy levels to low energy levels. When energy is released from a photon, the distance between the two levels of photon energy is the same.

If the PN-junction diode is in the forward bias, current flows through the diode. The flow of current in semiconductors is due to two currents in the opposite direction of the current and the flow of electrons in the current direction.

Hence there will be recombination due to the flow of these charge carriers. The recombination indicates that the electrons in the conduction band jump below the valence band. When electrons jump from one band to another the electrons will emit electromagnetic energy in the form of photons and the photon energy is equal to the forbidden energy interval.