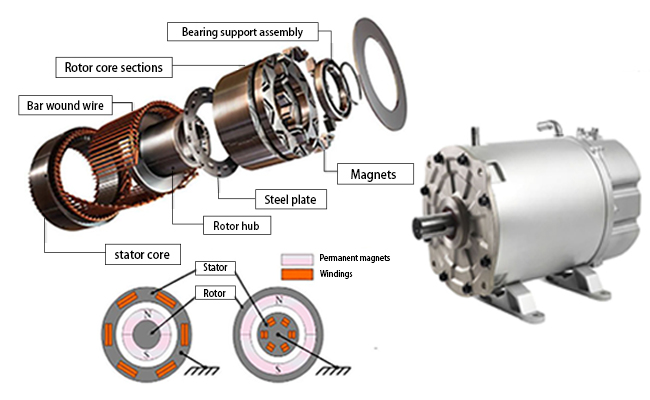 When the rotating magnetic field has P pairs of magnetic poles, every time the alternating current changes one circle, the magnetic field will turn 1/P revolution in space. So the synchronous speed n1 is: n1=60f/p
f: f is the frequency of the AC supply in Hz
P: P is the number of pole pairs produced by the stator winding 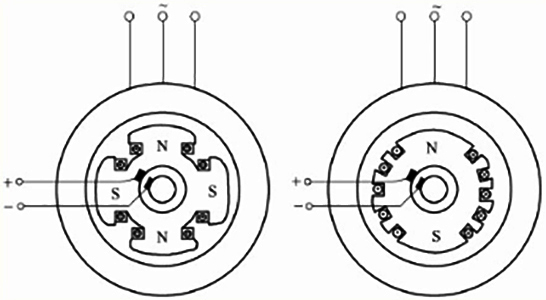 Like other rotating motors, permanent magnet synchronous motors consist of two parts: stator and rotor. The stator of the rotating magnetic pole type synchronous electronic is mainly composed of base, iron core and stator winding. In order to reduce the hysteresis and eddy current loss, the stator core is laminated with thin silicon steel sheets, and the inner surface of the stator core is embedded with spatially symmetrical three-phase windings. Rotor is mainly composed of rotating shaft, slip ring, iron core and rotor winding. In order to take into account the requirements of magnetic permeability and mechanical strength, the rotor core is often forged from high-strength alloy steel. Rotor core is equipped with an excitation winding, and its two outlet ends and two slip rings are respectively connected. For facilitating the start, the surface of the salient-pole rotor magnetic pole is also equipped with guide bars made of brass, and the two end faces of the magnetic poles are respectively connected by copper rings to form an incomplete cage start winding.

Starting the synchronous motor can only produce an average torque at the synchronous speed. If the stator is connected to the power grid immediately and the rotor is excited by DC when starting, the stator rotating magnetic field immediately rotates at a synchronous speed, and the rotor magnetic field is temporarily stationary due to the inertia of the rotor, and the electromagnetic torque generated at this time will be positive or negative. Alternating and its average value is zero, so the motor cannot start by itself. To start a pmsm motor, other methods must be used. There are mainly two methods.