How does a rotating magnetic field generate?
For three phase induction motor, the windings U/V/W with completely the same 3-phase structure are placed in the stator core. Each phase of the winding spatially differs 120 degrees electrical angle from each other, as shown below, and the three-phase windings are supplied with symmetrical three-phase AC as shown in Figure (b) and (c) below. Here take 2 pole induction motor as example to illustrate the magnetic field location in space as the current at different times.

As shown in the Figure (b) above, it is assumed that when the instantaneous value of the current is positive, it flows in from the first ends of each winding and flows out of the tail ends. On the contrary is when the current is negative value.
As show in the Figure (c), when ωt=0, iu=0, the value of iv is negative and iw is positive. Then, the current of phase V flows in from V2 and flows out of V1, whereas W-phase currentflows in from W1 and out of W2. According to Ampere's right-handed rule, the direction of the composite magnetic field produced by the three-phase current can be confirmed the instant ωt=0, as shown in figure (d) ① below. It can be seen that the composite magnetic field is a pair of poles and the direction of the magnetic field is consistent with the direction of the longitudinal axis, that is, the top is the North Pole and the bottom is the South Pole.

At ωt=π/2, after a quarter of a cycle, the value of iu changes from the zero to maximum, and the current flows in from the first end U1 and outflow the end U2. The iv value is still negative, so the direction of V-phase current is the same as shown in figure ①. iw also becomes negative, and thus W-phase current is W2 inflow and W1 outflow. The composite magnetic field’s direction is shown in the figure (d) ② that the magnetic field direction rotates clockwise 90°compared with the one when ωt=0.
Using the same analytical method, the magnetic fields can be plotted when ωt=π, ωt=2/3*π, and ωt=2, as shown in (d) ③ ④ ⑤ respectively. It is obviously seen from the figure that the magnetic field direction gradually rotates clockwise, totally 360°, that is, a cycle of rotation.

It can be concluded as follows: the three-phase windings are placed in the stators of three phase AC induction motor in the same structure but in the spatial position with 120 degree electrical angle difference from each other. As they are separately supplied with the three phase AC, the composite magnetic field generated between the stator and rotor rotates along the inner circle of the stator, which is called as the rotating magnetic field. 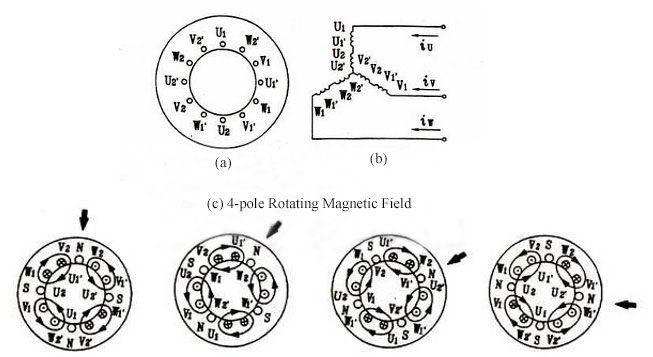 Therefore, the speed of rotating magnetic field is calculated by: n1 = 120f1 / P, where is:

Comments
Guest
3/1/2019 7:50 AM
'P' does not = number of poles but number of pairs of poles.
Leave your comment
Recommend Articles
Blog search
Popular Tags