Contactor is an automatic electromagnetic switch for long-distance frequently connected or disconnected AC and DC main circuit and high-capacity control circuit. The main control object of a contactor is the motor, it can be used to control other loads as well.
According to the current types that through the main contacts, contactor is divided into AC contactor and DC contactor. The structure and working principle of both are basically the same, which mainly consists of three parts, electromagnetic mechanism, contact system and arc-extinguishing equipment. In the electrical control circuit of machine tool, AC contactor is mainly used. This article focuses on the basic structure of the AC contactor.

Electromagnetic System
Electromagnetic system of the AC contactor mainly consists of three parts, which are the coil, static iron core and armature (moving iron core). Through the power-on and power-off of electromagnetic coil, it pulls in or releases the armature and static iron core, thus completing the close or disjunction between movable contact and static contact, realizing the purpose of connecting or disconnecting the circuit.
When the AC contactor operates, alternating current (AC) in the coil will generate an alternating magnetic flux in the iron core, so the suction between the iron core and armature is also changing, which will lead the armature to vibrate and make noise. To eliminate this phenomenon, a slot could be opened at two different ends of the iron core and armature of the AC contactor, in which a short-circuit ring made from copper, constantane or nicochrome is embedded. The short-circuit ring is also called for damping ring or divided magnetic ring. After the iron core is installed with a short-circuit ring, the coil current generates a magnetic flux Φ1 as the coil is connected to the alternating current. Part of Φ1 go through the short-circuit ring and generate induced current in the ring, as a result, another magnetic flux Φ2 will be produced. According to the law of electromagnetic induction, Φ1 and Φ2 have different phase position, namely Φ1 and Φ2 can't be zero at a same time, thus the magnetic adhesion F1 and F2 produced by Φ1 and Φ2 can’t be zero at a same time. By this way, the iron core and armature have a suction at any time, the armature will always be suck, thus the vibration and noise will be significantly reduced. 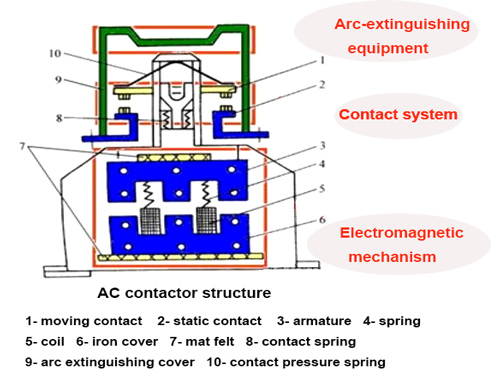 Contact System
Contact can be divided into three types of point contact, line contact and surface contact by contact conditions, the contract of AC contactor is generally double breakpoints bridge contact.
According to the make-break capacity, contract of AC contactor is mainly divided into main contact and auxiliary contact. The main contact is used for main circuit that has a large on-off current, it generally consists of three couples of make contacts which have larger contact surface. Auxiliary contact is used for control circuit that has a small on-off current, it generally consists of two couples of make contacts and two couples of break contacts.

Arc-extinguishing Equipment
When the AC contactor disconnects circuits with large current or high voltage, a strong arc will be produced between the movable and static contacts. On one hand, the produced arc would burn the contacts and reduce the service life of the contacts; On the other hand, the arc will extend the cut-off time of the circuit, even lead to arc short circuit or fire accidents. All contactors with a capacity higher than 10A are equipped with the arc-extinguishing equipment. In the AC contactor, commonly used arc-extinguishing methods are as follows: