Current transformer is mainly used to measure the current of busbar and primary side with iron core coils in AC occasion. It can detect the DC current, can be single core or dual cores, generally, it's equipped with auxiliary DC winding. Such a structure is simple, reliable and slow. Technology and design of the current transformer are complex, its common precision is 5%, it's difficult to reach 0.5% because phase position and compensation are difficult. A current transformer is an electrical component that turns large current into small current, it doesn't change the current frequency but only the size. Its secondary side current is 5A, that means the output rated current is 5A. It's mainly used for electrical control, measurement, protection and signal.

Current sensor is a generalized concept, it generally refers to the secondary instrument now, particularly, in the field of semiconductors and microelectronics, such as hall sensor, fibre optic sensor. Semiconductor current sensor is a convenient commodity with fast response, easy compensation and correction, its accuracy can reach one thousandth. A current sensor is an electrical component that transforms AC into DC or DC into DC. Its output current is DC 4~20mA, which is an analog quantity. 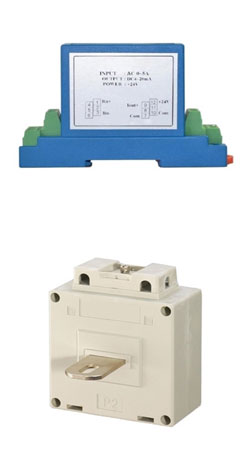