What are the Types of Current Sensor?

A current sensor is a detection device that can sense the information of the measured current, and can transform the sensed information into electrical signals that meet certain standards or other required forms of information output according to certain rules to meet the needs of requirements for the transmission, processing, storage, display, recording and control of information. 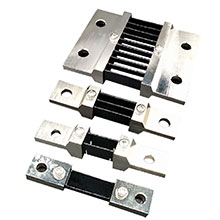 Shunt resistor is used to measure DC current. When a DC current passes through a resistor, a voltage is generated across the resistor, and shunt resistor is made according to this principle. Its advantages are high accuracy, fast response speed, and low cost; while the disadvantage is that the measurement circuit is not electrically isolated from the current being measured. Shunt resistor are suitable for low-frequency, small-amplitude current measurements. 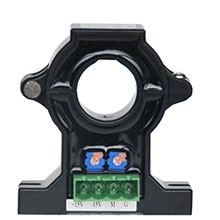 Hall current sensor is made according to the principle of the Hall effect and Ampere's law, that is, a magnetic field proportional to the current is generated around the current-carrying conductor, and Hall device is used to measure this magnetic field. Thus, non-contact measurement of current is made possible. Hall current sensor can measure DC and AC, and the frequency is up to 100KHz.It has high precision and good isolation. However, the disadvantage is that the influence speed is slow, and the measurement of small current lacks accuracy.

Rogowski coil, also known as magnetic potentiometer, is an air-core coil wound on a non-magnetic skeleton. It measures large currents based on the principle of electromagnetic induction. It has the advantages of wide measurement range, high precision, good insulation performance and no magnetic saturation. But it can only be used to detect AC current. 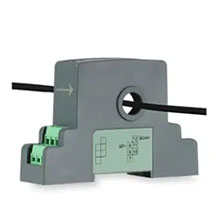 With the development of fiber optic technology and material science, fiber optic current sensing systems emerged. Because of its good insulation and anti-interference ability, high measurement accuracy, easy miniaturization, no potential explosion hazard and a series of advantages, it has been widely valued by people. The main principle of the fiber optic current sensor is the Faraday effect of the magneto-optical crystal.

The laser beam passes through the optical fiber, generates polarized light through the polarizer, and enters the magneto-optical crystal through the self-focusing lens: under the action of the external magnetic field generated by the current, the polarization plane rotates by the angle of θF; through the analyzer and the optical fiber, it enters the signal detection system, the current value is obtained by measuring θF. When the angle between the main axes of light transmission of the two polarizers in setting system is 45°, the output light intensity after passing through the sensing system is:

Where lo is the incident light intensity. By measuring the intensity of the outgoing light, θF can be obtained, so that the magnitude of the current can be measured.