How Does a Pneumatic Motor Work?

There are a number of air motor designs, we chosen the vane rotor design due to its simplicity and reliable operation. Plus the small external dimensions of vane motors make them suitable for all applications. 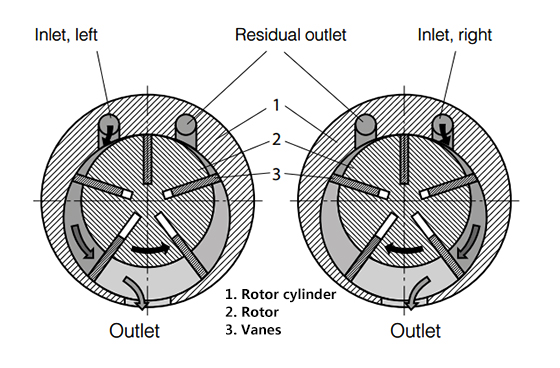 The working principle of the air vane motor is that a rotor with a number of vanes is enclosed in a rotor cylinder. Compressed air is supplied through one connection and air escapes from the other. For reliable starting, the springs press the vanes against the rotor cylinder and the air pressure always bears at right angles against a surface. This means that the resulting torque of the motor is due to the vane surfaces and the air pressure.

A family of curves as above, from which torque, power and air consumption can be read off as a function of speed. Power is zero when the motor is stationary and also when running at free speed (100%) with no load. Maximum power (100%) is normally developed when the motor is driving a load at approximately half the free speed (50%). 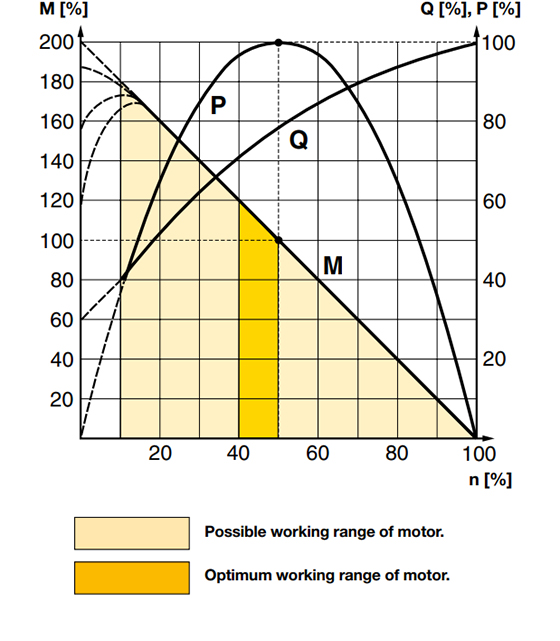 Torque at free speed is zero, but increases as soon as a load is applied, rising linearly until the motor stalls. As the motor can then stop with the vanes in various positions, it is not possible to specify an exact torque. However, a minimum starting torque is shown in all tables. Air consumption is greatest at free speed, and decreases with decreasing speed, as shown in the above diagram.

The performance of an pneumatic motor is dependent on the inlet pressure. At a constant inlet pressure, air motors exhibit the characteristic linear output torque / speed relationship. However, by simply regulating the air supply, using the techniques of throttling or pressure regulation, the output of an air motor can easily be modified. The most economical operation of an air motor (least wear, least air consumption, etc.) is reached by running close to nominal speed. By torque of M=0, the maximum speed (idle speed) is reached. Shortly before standstill (n-0), the air motor reaches its maximum torque (Mmax=2 x M0). At nominal speed (nn), for example in the middle of the speed range, air motor reaches its maximum power output (Pmax).

To adapt the difference of air pressure with your operation conditions. 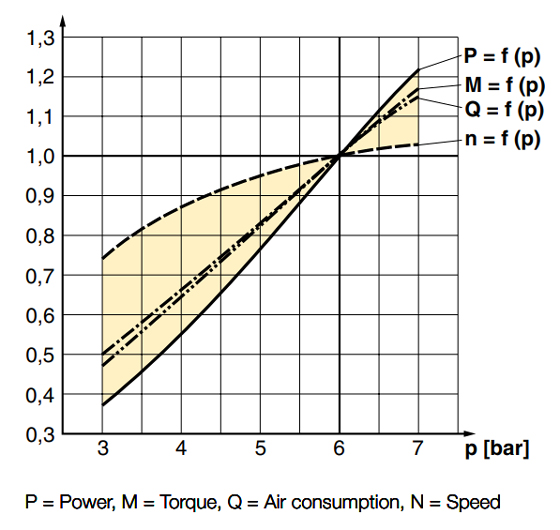 All catalogue data and curves are specified at a supply pressure of 6 bar to the motor. This diagram shows the effect of pressure on speed, specified torque, power and air consumption.

Start off on the curve at the pressure used and then look up to the lines for power, torque and air consumption. Read off the correction factor on the Y axis for each curve and multiply this by the specified catalogue data in the table, or data read from the torque and power graphs.

The speed and torque can also be regulated by installing a pressure regulator in the inlet pipe. This means that the motor is constantly supplied with air at lower pressure, which means that when the motor is braked, it develops a lower torque on the output shaft. 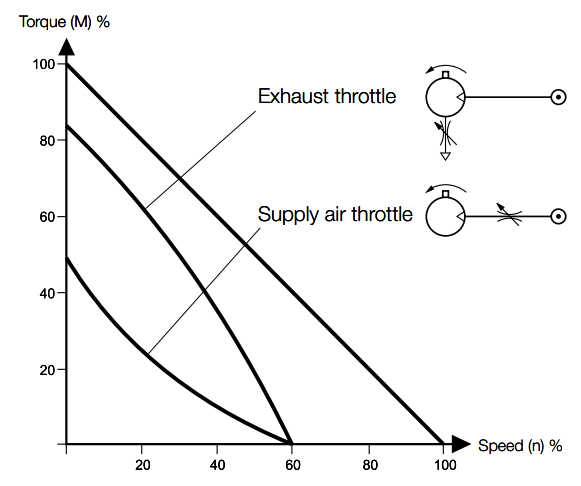 Every size reduction or restriction on the air line, whether of the supply hose itself or fittings, before the pneumatic motor affects the amount of the supplied air. By throttling you reduce the speed of your motor and simultaneously, the required torque. That means that you reduce the motor performance. The most common way to reduce the speed of a motor is to install a flow control valve in the air outlet, you can set the speed without loss of the torque.

When the motor is used in applications where it must reverse and it is necessary to restrict the speed in both directions, flow control valves with by-pass should be used in both directions. If the inlet air is restricted, the air supply is restricted and the free speed of the motor falls, but there is full pressure on the vanes at low speeds. This means that we get full torque from the motor at low speeds despite the low air flow. Since the torque curve becomes "steeper". this also means that we get a lower torque at any given speed than would be developed at full air flow. The benefit of throttling the inlet is that air consumption is reduced, whereas throttling the exhaust air maintains a slightly higher starting torque.