How Does a Spectrophotometer Work?

Today, let's study the composition, working principle, and characteristics of a spectrophotometer. We hope that after reading this article, you will have a general idea of spectrophotometers.

Spectrum: Light is an electromagnetic wave and can be represented by the wavelength "λ". The electromagnetic spectrum consists of a spectrum of continuous wavelengths of different properties. For biochemistry, the most important wavelength regions are visible and ultraviolet light. 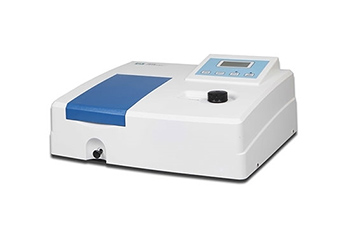 The wavelength of light is the distance between two adjacent wave crests.

The number of waves passing through a fixed point per unit time.

The ultraviolet region can be divided into ultraviolet (near ultraviolet) and vacuum ultraviolet (far ultraviolet). Since absorption cells (also known as sample cells, cuvettes, etc.) and optical components and oxygen can absorb light with a wavelength of less than 190 nm, conventional UV measurements are concentrated in the near-ultraviolet region, that is, 200 nm to 400 nm. The visible light region is 400nm to 800nm.

The molecules that make up a substance are in a certain state and are constantly moving. Molecular motion can be divided into translation, rotation, vibration and the movement of electrons in the molecule. Each state of motion is at a certain energy level, so the energy of a molecule is the sum of all its energy levels.

Each energy of a molecule has a series of energy levels. The energy level is not arbitrary, but has quantized characteristics. Usually, the molecule is in the ground state. When it absorbs a certain energy and transitions to the excited state, an absorption spectrum is generated.

According to the principle of quantum mechanics, the energy state of molecules changes in a jumping manner according to certain rules. Under the irradiation of incident light, when the molecules absorb light, the increase of its energy is discontinuous. The frequency of, and the energy difference between the two energy levels must conform to the following relationship:
E=E2- E1=h

In the visible light region, in addition to some substances that absorb light, many substances do not absorb light themselves, but can be determined by adding color reagents or processing to develop color under certain conditions. Therefore, it is also called colorimetric analysis.

Since there are many factors that affect the color depth during color development, and instruments with poor monochromatic light purity are often used, standard substances or reference substances should be used for simultaneous operation.