What are the Types of Spectrophotometer? 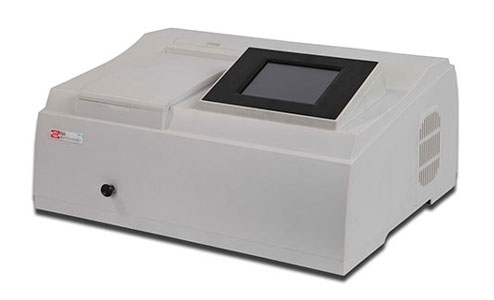 The measured wavelength range of the ultraviolet visible spectrophotometer is 200~1100nm in the ultraviolet region. Based on the principle of ultraviolet-visible spectrophotometry, the UV VIS spectrophotometer is an analytical instrument that utilizes the absorption of radiation in the ultraviolet-visible spectrum region by substance molecules for analysis. This instrument is used to measure the absorbance of the sample to visible light or ultraviolet light, and perform qualitative and quantitative analysis on it. The optical path of the product can be divided into single beam, pseudo double beam and double beam. At present, this instrument is one of the most used analytical instruments with the widest coverage. It is widely used in many fields such as life science, material science, environmental science, agricultural science, chemistry and chemical engineering. The instrument is mainly composed of light source, monochromator, absorption cell, detector and signal processor. The function of the light source is to provide a stable continuous spectrum of sufficient intensity. The ultraviolet light zone usually uses a hydrogen lamp or a deuterium lamp; the visible light zone usually uses a tungsten lamp or a halogen lamp. The function of the monochromator is to decompose the composite light emitted by the light source and separate monochromatic light of the required wavelength from it. The dispersive elements are prism and grating. A glass absorption cell is used for the measurement of the visible light region, and a quartz absorption cell is used for the measurement of the ultraviolet light region. The function of the detector is to detect the intensity of the transmitted light through a photoelectric conversion element and convert the optical signal into an electrical signal. The commonly used photoelectric conversion elements of this instrument are phototube, photomultiplier tube and photodiode array detector.

Infrared spectrophotometer exactly refers to the light emitted by the light source, and it is divided into two beams of equal energy and symmetry. One beam is the sample light passing through the sample, and the other beam is the reference light as the reference. After the two beams of light enter the photometer through the sample chamber, they are modulated by the fan-shaped mirror at a certain frequency to form an alternating signal. The general infrared spectrum refers to the infrared spectrum greater than 760nm. This is the most commonly used spectral region for studying organic compounds, so it can be used to analyze samples in various states (gas, liquid, and solid). The spectrum has the characteristics of fast speed, small sample amount, strong characteristics, and no damage to the sample.

Fluorescence spectrophotometer is an instrument used to scan the fluorescence spectrum emitted by liquid-like fluorescent markers. It can provide many physical parameters including excitation spectrum, emission spectrum, fluorescence intensity, quantum yield, fluorescence lifetime, fluorescence polarization, etc., which can reflect the bonding and structure of molecules from various angles. The measurement of these parameters can not only do general quantitative analysis, but also infer the conformational changes of the molecule in various environments, so as to clarify the relationship between molecular structure and function. The scanning range of excitation wavelength of a fluorescence spectrophotometer is generally 190~650nm, and the scanning range of emission wavelength is 200~800nm. Therefore, the instrument can be used for spectral scanning of liquid and solid samples (such as gel bars). The instrument is widely used in many fields, such as scientific research, clinical inspection, food inspection, teaching experiment, chemical industry, medicine, biochemistry, environmental protection and so on.

Atomic absorption spectrophotometer is also called atomic absorption spectrometer. This instrument analyzes the metal elements based on the effect of the atomic vapor of the ground state of the substance on the characteristic radiation absorption. The light source emits the characteristic spectral radiation to be measured, which is absorbed by the ground state atoms of the measured element in the sample vapor after passing through the atomizer. The content of the measured element can be obtained by measuring the size of the characteristic radiation absorbed. It can sensitively and reliably determine trace or trace elements, so it has become a powerful tool for material analysis and quality control departments to analyze major and trace metals (semi-metals).