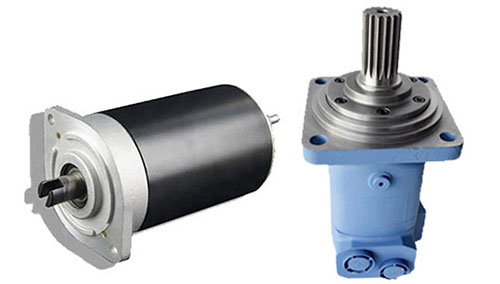 Hydraulic motors can be classified in different ways. Based on different rated revolving speed, there are high-speed and low-speed motors. And in terms of configuration, there are mainly four types of hydraulic motors among others, namely, gear motors, vane motors, radial plunger motors and axial plunger motors. ATO's hydraulic pump motors varies in speed and output power.

High-speed Hydraulic Motors
This kind of motors boast of 500 rpm and above in output speed. Apart from this, it’s featured with low rotational inertia, fast start-up and brake, immediately-responded speed regulation and commutation. In general, the output torque produced by high-speed hydraulic motors is not quite high.

Low-speed Hydraulic Motors
This type of motors provides an output speed lower than 500 rpm characterized by large displacement, large size and low revolving speed, and consequently it can be connected directly to the transmission mechanism without the support of speed reducers, thus streamlining the whole mechanism.

Gear motors
Gear motors are adapted to negative and positive rotation thanks to a balanced design where the inlet and outlet ports of the motor are equal in size and the internal structure is symmetrical. And the motor has a separate oil drainage port to clean out the leakage at the bearings. The device employs rolling bearings to reduce friction torque upon start-up. The gear hydraulic motor has more teeth than its pump for torque ripple reduction. Gear motors have the advantages of small size, light weight, good oil suction capacity, convenient maintenance, impact resistance and low inertia. But on the other hand, gear motors have some shortcomings such as large pressure and torque ripple, low volumetric efficiency and input pressure, low starting torque (only 60%-70% of rated torque), high noise, and poor stability at low speed. Therefore, gear motors are only applicable under high-speed and small-torque condition. It’s generally suitable with agricultural machinery and other mechanical equipment that does not demand much in torque uniformity. 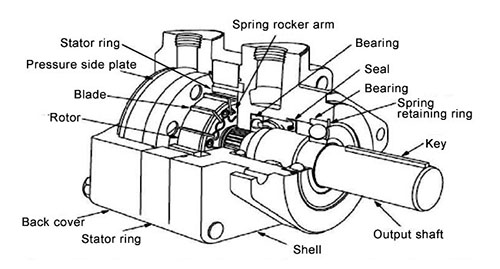 But it has large leakage with low input pressure and works unstably at low speed, and its anti-pollution capability is not that good as gear motors. Therefore, vane motors generally satisfy demands of high speed, low torque and sensitive motion.

Axial plunger motors
The working principle of axial plunger motors is that the oil distribution plate and the swash plate are kept in their original place, while the motor shaft rotates together with the cylinder connected to it. When the pressure oil enters the cylinder’s plunger hole through the window of the oil distribution plate, the plunger extends out driven by the pressure oil and closely sticks to the swash plate, following which, the swash plate produces a reactive force against the plunger, which can be split into an axial force and a vertical force Q. Q is balanced with the hydraulic pressure on the plunger, and Q enables the plunger to generate a torque against the center of the cylinder, driving the motor shaft in negative rotation. The instantaneous total torque generated by the axial plunger motor is pulsating. If the input direction of pressure oil is shifted, the motor shaft will move in positive rotation. Changes in dip angle of the swash plate, namely, the variations of displacement affect not only the motor’s torque, but also its speed and rotary direction. The greater the dip angle, the greater the torque produced and the lower the speed.