How does Hall Sensor Work on BLDC Motor?

Hall encoder working principle
Hall sensor is a kind of sensor that converts the mechanical geometric displacement on the output shaft into pulse or digital quantity through magnetoelectric conversion. The Hall encoder is composed of Hall code disc and Hall sensor. The Hall code disc is equally arranged with different magnetic poles on a circular plate with a certain diameter. The Hall code disc is coaxial with the motor. When the motor rotates, the Hall element detects and outputs the corresponding pulse signal. Generally, it will output A and B square wave signals with a certain phase difference. Through the two output signals, the rotation direction of the BLDC motor can be judged.
The detection principle of photoelectric encoder and Hall encoder is the same. They are all detected by outputting A and B phase square wave signals. The difference is that the accuracy of the photoelectric encoder is much higher than that of the Hall encoder. 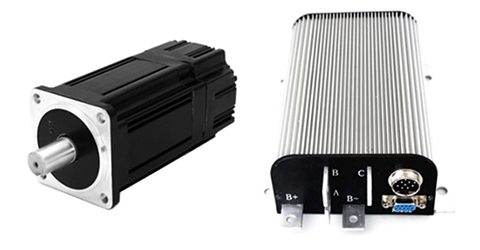 How to calculate the speed of a brushless DC motor?
The speed of the brushless DC motor is calculated by detecting the number of output pulses. The principle is probably as follows: For example, a brushless DC motor outputs 500 pulses in one revolution, as long as a fixed detection time is set by the microcontroller timer. If the time is 1 second, then the number of pulses within 1 second can be obtained through the external interrupt or input capture of the microcontroller. If 1000 high levels (1000 pulses) are detected within 1 second, it means that the motor has just made two revolutions. At this time, the corresponding speed can be calculated according to the diameter of the wheel. In order to improve the detection accuracy, you can also detect the high and low levels of the AB outputs at the same time.