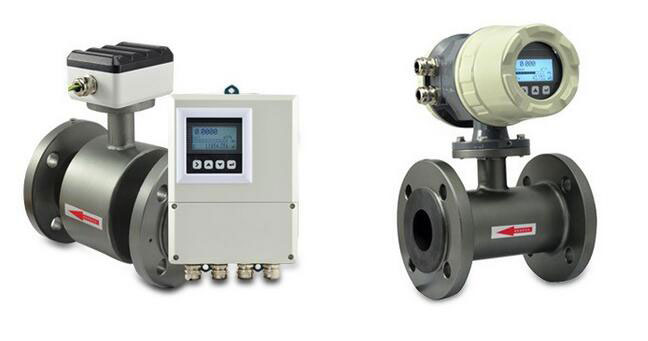 The magnetic flow meter conducts flow measurement according to Faraday’s law of electromagnetic induction. With a large measurable flow range, the ratio of the maximum flow rate to the minimum flow rate maintains above 20:1. The mag flow meter is suitable for wide range of industrial pipe diameter, and the maximum can reach up to 3m. The output signal and the measured flow are linear, and the magnetic flow meter has high measurement precision. It can effectively measure the flow rate of fluids with a conductivity more than 5μs/cm, such as acid solution, alkaline solution, saline solution, water, sewage, corrosive liquid, mud, ore pulp, and paper pulp. Nevertheless, the electromagnetic flow meter cannot be used to measure the flow of gases, steam and purified water.

After taking quick look at the magnetic flow meter, let’s come to the point and dive into the working principle.

The volume flow Qv, equals the product between the fluid flow rate v, and the pipeline cross-sectional area (πD2)/4, so let’s substitute Eq. (1) in.

After that, the sensor of magnetic flow meter takes the induced electromotive force E as the flow signal, and transmits it to the converter. After signal processing, including amplification, transforming and filtering, the instantaneous flow rate and the integrated flow rate can be displayed in the dot-matrix liquid crystal screen with the backlight. The converter of the magnetic flow meter features the 4-20mA output, alarm output and frequency output, and is equipped with the RS-485 communication interface. It also supports the HART and MOBUS protocol.

Please be note that the parameters of different electromagnetic flowmeters are slightly different. For more details, please move to the product page of ATO magnetic flow meter. Please refer to the user manual before use.