1. The liquid to be tested contains bubble.

This is a common phenomenon that the liquid to be tested contains bubble. It is caused by external inspiration and internal liquid dissolution. But the magnetic flowmeter cannot distinguish between liquid and bubble, so it will cause errors when calculating the measurement together. 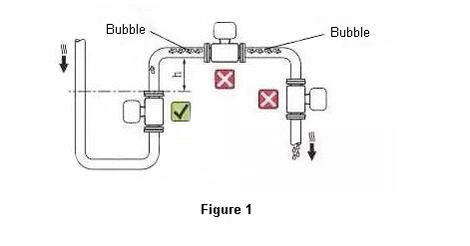 2. The liquid to be measured is non-full in pipe.

The partially-filled pipe is an extreme situation with bubbles. That is, the liquid is non-full in the pipe and a large number of bubbles fill above the liquid in the pipe. If the liquid has not gone through the electrode, the measurement result will be greatly devalued, which is a mistake in engineering design.

As Figure 2 below shows, there are some requirements for the correct installation of the magnetic flow meter in different pipes. Keep it in mind and it would be helpful when installing, so as to make sure the measurement accuracy of magnetic flowmeter. 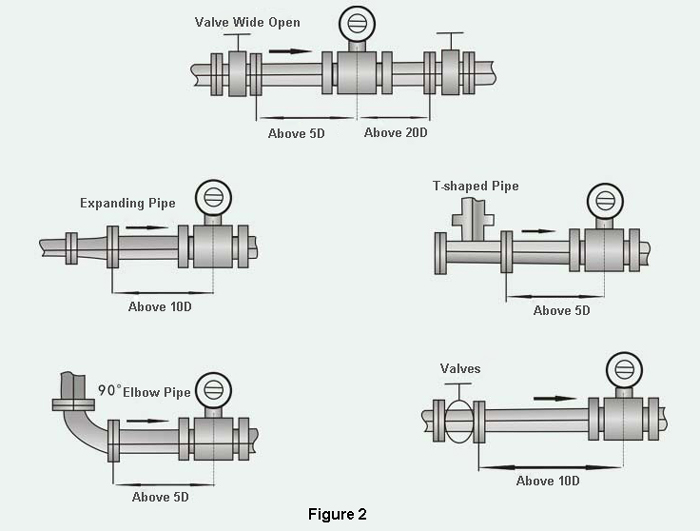 Due to the gradual deposit of conducting materials, flow signal has a short circuit. This type of fault usually will not appear in the debugging period, but appear after operation for a period of time.

For this above problem, disassemble the flowmeter and clean the insulating layer where brown rust appears in most cases, which is caused by a large amount of iron oxide sediments in electrolytic solution. Any case in which operating is normal at the beginning, but the flow is getting less and less as time goes by, you should analyze the possibility of such fault.

In model selection of magnetic flowmeter, we often encounter media that is easy to crystallize. Even though most of the materials can be measured normally at normal temperature, and conduit has effect of heat tracing and preservation except the sensor measuring pipe inside the flowmeter, so a solid layer is formed at the internal wall by cooling down when the common fluid flows through the measuring pipe.

For the above problem, the magnetic flow meter can work normally after the replacement of tantalum electrode by the factory. 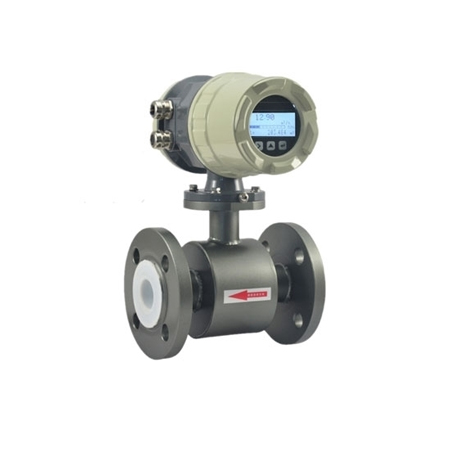 In general, if the cable between the sensor and the converter is long and there is strong electromagnetic interference around it, the cable probably has introduced the interference signal to form common mode interference, which results in display distortion, non-linear or large-scale sloshing.

Aiming at this situation, first of all, keep far away from strong magnetic fields as possible (such as large motors, large transformers and power supply cable nearby). Then, shorten the length of cable as possible and take shielding measures.

7. Unsymmetrical flow of the fluid to be measured

Under normal conditions, the current velocity of fluid in the pipe is required to axisymmetric distributed with even magnetic field. In fact, non-axisymmetric velocity distribution often occurs, and when whirling current appears, it will affect output and then produce big measurement errors.

So, some actions should be taken to avoid it. First of all, there are enough straight pipe sections upstream to ensure that the current velocity is distributed in the concentric circle. Besides, the internal diameter of the magnetic flowmeter should be the same as the internal diameter of pipes within a certain range of upstream and downstream, otherwise the distribution of current velocity will not be even. If there is no enough straight pipe sections upstream, you can install flow regulator, but this can only make up partially.

8. Vibration of the installation site affects the accuracy of magnetic flowmeter.

The magnetic flowmeter has strict requirements for the vibration of the installation site, so it must be installed in the place with minor vibration, otherwise there will generate the measurement errors.